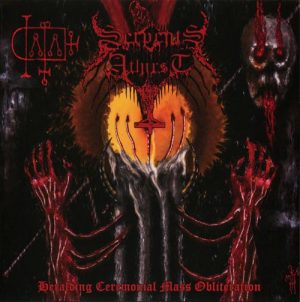 Hand on hearts, we’ll admit, our knowledge of Sri Lankan metal is limited, even with Annick Giroux’s World Downfall series guiding our hand through these things. Serpents Athirst are a four-piece black metal band who’ve had their EP ‘Heralding Ceremonial Mass Obliteration’ released on Indian underground label Cyclopean Eye and over here via that ear to the ground on all things death metal, Invictus Productions.

It’s a short EP, but as with all black/war metal it doesn’t fuck around. The EP’s introduction samples angelic Christian choirs with background air raid sirens and bombshells dropping from the sky before kicking off with a Tom G Warrior-esque grunt. The production is nasty, raw and savage and the band may not have a sound that sets them apart, but there is something for them to build on for the future. It’s still a brisk, sharp and tight release that’ll please any fans of Nuclear War Now! releases. One thing’s for sure and that’s Serpents Athirst are a true voice of the underground.