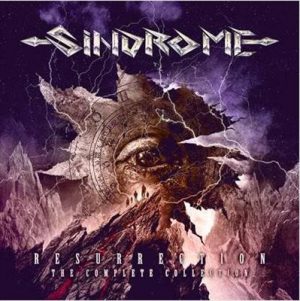 Long feted as one of the most compelling of the thrash-era outfits who, for whatever reason, never graduated from demo recordings to the golden prize of a record deal, Sindrome are best known for their ‘Into The Halls Of Extermination’ demo tape from 1987.

From the very start of the first demo, Sindrome simply ooze quality. From the songs to the sound, ‘Into The Halls Of Extermination’ is, almost thirty years down the line, still deserving of its classic status. The venomous ‘Precognition’ and the title track underlining the genuine fact that some bands from this period managed to record demo tapes that simply crapped on a decent-length list of bands who managed to get a deal and an album out there. Think ‘Darkness Descends’ as a template of brutality, and work back to this. Four years later the band revealed a new line-up and a second demo in the form of ‘Vault Of Inner Conscience’. No less brutal but with a slightly more progressive and technical edge, it marked the final recording of the band, but helped to cement their name in metal history.

Coupled with the demo collection is a live set recorded from a support slot on the ‘Scream Bloody Gore’ tour; as it is with these Century Media archival collections such live recordings are generally superfluous to all but completist die-hards; while this recording demonstrates Sindrome’s deft ability to translate their sound and power onto the stage, the sad-but-true highlight is undoubtedly towards the end of the first number when the show taper is heard to yell, “here, hold this. I’m going for a piss” above the din, replete with equipment and sound fumbles until the taper returns.