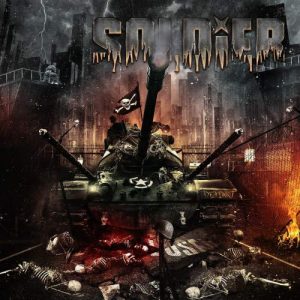 This name is probably more familiar to maniacs who dig deeper into the goldmine that is the NWOBHM. Soldier are mainly known for their debut single ‘Sheralee/Force’ from 1982, but beyond that, sadly, they haven’t got a legacy of material recorded back in the day like other rejuvenated bands of the same era. However, they were pretty active around 2004/2005, and then again from 2013 until now. ‘Defiant’ is their newest output and includes ten new songs. As you might recall, their early recordings were solid, riff-oriented heavy metal, but it looks like they recently softened their sound, and they walk a thin line between metal and rock, so comparisons to Van Halen or Def Leppard seem to make sense. It’s worth mentioning the recording is pretty decent (these days many bands release home-recording quality material), but to be honest it’s something for those who prefer melodic sounds than the heavy ones.