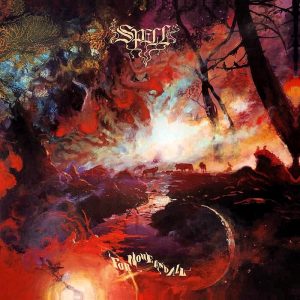 With guitars perfectly tuned to 1983, soaring melodic vocals and an organic production, ‘For None And All’ sets its stall out as a highly competent traditional heavy metal album by the first chorus. But what would satisfy many bands in the current trad metal crop is just the starting point for Spell on their second album.

Tastefully embellished with John Carpenter-sounding synths and eerie choral vocals, ‘For None And All’ attempts something much braver than a timid retreading of the well-beaten path to trad metal glory. The vast expanses of sound found on album highlight ‘Vanitas’ and synth-led passages on ‘Too Late’ bring new colour to the heavy metal palate and replenish the original power of the classic heavy metal forms that many can only wield as cliché.

Though clearly a well-thought out record with much to enjoy in its multiple layers of sound, at no point does ‘For None…’ forget to rock, with each one of the ten tracks packed with great riffs. Playing an ‘old’ style there are plenty of blueprints to draw from but rarely is it executed as well as as Spell do on triumphant opener ‘Madame Psychosis’ or album midpoint ‘The Veil’. The slower tracks are no less exhilarating with the twin harmonic twin guitars on ‘River Of Sleep’ transporting the listener not just to metal’s nostalgic glory days but to the timeless mystic genesis of heavy metal consciousness- it’s great stuff!

Another great release from the UK’s Bad Omen and one that will surely see Spell climbing the ranks.