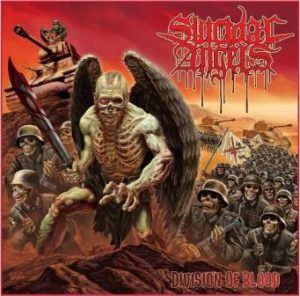 With six albums in almost a decade, these Greek thrashers are definitely one of the most hard-working bands out there and deserve every single praise they have been given. Especially when its coming for someone like Mille Petrozza (Kreator) who considers them as one of the best new thrash metal bands of our times.

Kreator is also one of the biggest influences for Suicidal Angels, but the Greeks took their influences a step further on ‘Division Of Blood’, where, with a line-up change and the addition of young guitar virtuoso Gus Drax (also in Paradox), they expanded their musicianship in the highest levels, but without presenting something new.

Suicidal Angels are a retro thrash metal; almost what Enforcer are for traditional heavy metal. The new album is as furious and frantic as the previous ones and there are some cool mid-tempo moments and melody in the guitar solos, but the band sounds always more comfortable with fast and ragged ripping tracks. However, besides the high acceptance they have from the old schoolers, it seems they are repeating themselves and the addition of Gus Drax is helping only until a point. There are not so many new bands playing old school thrash metal that have reached their sixth release, so we can’t tell what the future will hold for Suicidal Angels, but something has to happen to get them further, otherwise they will only go backwards.