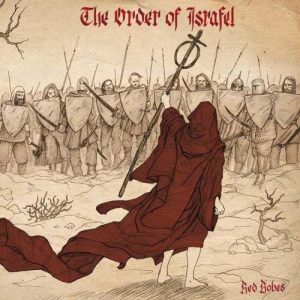 Swedish doomers The Order Of Israfel play it straight for their second full-length with another offering of no-frills doom metal that will do much to console those still mourning Cathedral’s demise. With guitar sounds honed to skull-crushing perfection, its clear that for TOOI, the quest for the ultimate expression of doom is inseparable from the quest for tone – this is every inch a guitarist’s album, bursting with harmonies and plenty of Candlemass-like malevolent progressions, all rendered with crushing clarity.

In contrast to the guitars, the vocals are quite understated with Tom Sutton delivering his traditionally pessi-mystic lyrics without pretension or over reliance on effects. Though refreshingly organic sounding, they do sometimes leave you wanting for a bit of Messiah-style bombast, particularly during the title track, with the portent of lines like ‘Spells are broken, Worlds are woken‘ unmatched by the plain delivery.

Though impressing with their trad doom chops, TOOI truly excel when they shed the prescribed existential burden of their chosen genre and allow themselves to have some fun. Doom bands have historically struggled when upping the tempo, but with ‘In Thrall To The Sorceress’ and ‘A Shadow In The Hills’, TOOI switch to heavy metal mode so convincingly that it frustrates they don’t do it more often. An album full of these would truly put TOOI amongst the titans.