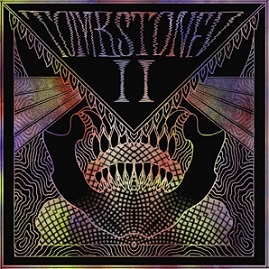 As their name doubtless suggests, Finland’s Tombstoned are yet another doom band worshipping at the altar of the sweet leaf and Black Sabbath. Their second, appropriately named album ‘II’ is a fuzzed out, vintage amp jaunt, paying plenty of psychedelic respects to the likes of Hawkwind. Despite the obvious feeling of “hasn’t this all been done before?” these Finns play with such dynamic energy that it’s easy to forgive the cut and copy styling of their music. It’s a fairly straightforward record with plenty of groove-laden highlights and melodic moments among the suffocating heavier passages.

The production of this album is what really rescues ‘II’ from mediocrity – the mastering makes it sounds like something straight from the back of a hotboxed VW van, and there’s even the odd glimpse of a slightly catchy chorus here and there. It’s an easy, inoffensive listen that checks all the boxes for paint-by-numbers doom metal. This is a record that, despite not having any massive flaws, could quite easily pass you by, and you wouldn’t feel any less fulfilled because of it. Good, solid, middle of the road background music? Absolutely. Innovative, exciting, essential listening for 2016? Absolutely not.