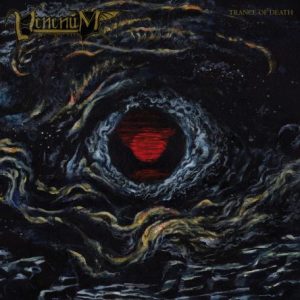 It was back in the mists of 2011 that the coffin lid first creaked open and the miasma of Venenum’s metal of death seeped into the ears of the underground. Their debut EP, coming in just shy of 30 minutes, was enough to stir waves worthy of Tiamat herself, with many enthralled by the quality of their output. 2013 saw the band embark on a European tour with Tribulation (then promoting the equally as fresh – if that word ever applies to this unhallowed genre – ‘The Formulas Of Death’) and the pact was sealed for many fans.

Now, we of course inhabit the foul year of our Lord 2017 and the intervening years have been ones of hushed anticipation, for nothing has been put forth from this German brood. It’s often difficult for a band to leave such gaps between releases unless they are already well-established and now that the wait is over, the question that no doubt everyone will ask is: “was it worth it?” Thankfully the quality of the their first and only release was brilliant enough to pique the interest of a group of people who are dedicated to the bewitched craft of death metal, not some throwaway genre, and a treat is very much instore for the ones who stayed faithful.

From the early works of Dissection through to the godfathers of brutality themselves, Morbid Angel, the atmospheres created within death metal albums often rely on accompaniments from instrumental tracks, and this notion was carried forth into Venenum’s debut. Happily, this tradition continues in ‘Trance Of Death’ with opener ‘Entrance’ firmly stressing the tone that this record will take: a beautifully macabre violin piece that is worthy of anyone’s ‘end of year’ track lists. From this point on we are shocked awake into the punishing ‘Merging Nebular Drapes’ – a track that stinks of the group circa 2011. They are back!

The riffs come thick and fast, something that immediately stands out about this band. It is most certainly death metal but the influence of classic ’80s metal a la King Diamond and Mercyful Fate through to the mood of obscure Italian doom shines through the guitar work. Beyond this there is an almost progressive element that comes to the fore, which in this scribe’s world is often a dirty word but Venenum blend it with a sense of psychedelia that moves their work down more inventive paths and serves to round the tone of the piece as a whole.

Much like the recent release from their one-time tour mates Tribulation, this new harvest will no doubt turn a few heads. It may even lose Venenum a few fans owing to the usual sense of ownership one feels about a band they have followed; especially a band that has generated such anticipation in its fan-base, however, ‘Trance Of Death’ should be ranked amongst the most engaging death metal discharges of the year.

You can listen to teaser track ‘Cold Threat’ here