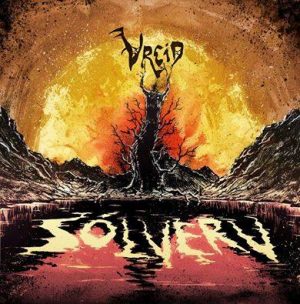 Vreid have been on an internal quest to find their own sound ever since they formed following the untimely demise of Windir. The exploration of heft, melody and emotional weight on ‘Milorg’, released in 2009, was the point where Vreid looked beyond traditional Norwegian black metal. 2011’s ‘V’ saw guitarist Strom rejoin his former Windir brothers and Vreid went in a more riff-driven direction, which reached its most obvious conclusion on the black ‘n’ roll of ‘Welcome Farewell’ (2013). ‘Sólverv’, therefore, could have easily continued in the same manner as its predecessor but as their past has dictated, Vreid never rest too long. Instead, the aggressive attack missing from ‘Welcome Farewell’ has returned and the musical simplicity of the former has been suppressed. On paper, ‘Sólverv’ could be seen as a simple regression to their Nordic second wave origins, but because of Vreid’s veteran control of melody and might, it’s more like the culmination of a decade-long journey of self-discovery.