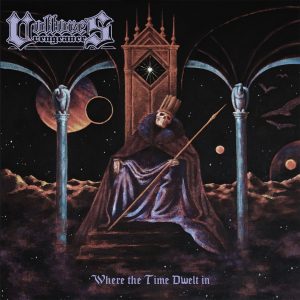 These Italians, after a demo last year, present a mini-album of five tracks (including an intro) and what you get here is epic and dark traditional metal inspired by ’80s US power metal, Iron Maiden (of course) and the early years of Running Wild and Blind Guardian. Add to this a brave dose of obscurity, from the production to the way they want to approach their music, lyrics and the band’s image, and you have something that we could describe as “future cult”.

Don’t get us wrong, but it seems that Vultures Vengeance (whose members already have a background in extreme metal) are pushing themselves to make something different that will sound “obscure” and “true” and in their attempt to stray from the path of all those new retro bands out there they are losing credit when it comes to originality.

‘Where The Time Dwelt In’ sounds different from many other newer bands, and even if they want to recreate the atmosphere of obscure ’80s metal, the production is just too poor and not a tribute to the olde at all. Leaving that aside, Vultures Vengeance might do bigger things in the future, since the songs are very promising; the structure and performance has indeed cult potential but they will need to work more professionally on how they approach the songs and how the final result will sound.

They seem to have the will, the ideas are indeed very good (love those galloping rhythms!) and they already have the elements a band needs to create music similar to the ’80s underground metal legends, but it needs something more than this EP.