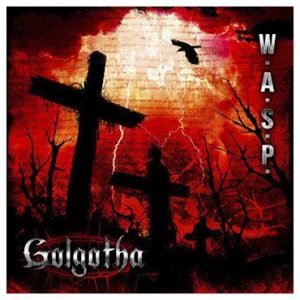 ‘Golgotha’, W.A.S.P.’s 15th studio album was conceived in 2011. You can read about the myriad delays in its creation on the W.A.S.P.Nation website from Blackie Lawless himself. ‘Scream’ starts out ‘Golgotha’ on a hard rocking note and mirrors the formula found on similar tracks that peppered ‘Dominator’ and ‘Babylon’. After ‘Scream’ the album plunges precipitously with the forgettable double shot of ‘Last Runaway’ and ‘Shotgun’. These tracks are “new” W.A.S.P. through and through, and serviceable in that they fill up space, but they sit mired by over melodicism and ultimately, lack punch. On ‘Last Runaway’ guitarist Doug Blair tries to right the wrong, but even his wonderful effort cannot save it. Things pick back up with ‘Miss You’, which (from W.A.S.P.Nation) was originally written for inclusion on ‘The Crimson Idol’. Lawless produces some great vocal work here, but ‘Miss You’ is ‘Golgotha’s best track because Blair’s emotive and fluid solos defy description, especially the lengthy, goose bump-inducing second one. ‘Fallen Under’ follows and while it is a good track it never truly catches fire or pushes the listener, although once again Blair shows his worth. With a title like ‘Slaves Of The New World Order’ you would expect some palpable rage, but instead Lawless opts for a more melodic rocking approach, which just… misses. ‘Eyes Of My Maker’ and ‘Hero Of The World’ flow by, with ‘Eyes…’ featuring some impassioned vocals from Lawless. Both tracks sound flat and lack edge due to their “formulaic” presentation. On the title track, Lawless implores repeatedly, “Jesus, I need you now…”, which is a far cry from W.A.S.P.’s early psychodrama days. Blair’s solo work is flawless and the true high point. Lawless, intensely personal regarding his Christian beliefs (he has, ironically, morphed into an electric circus evangelist, if you will) might have found personal catharsis in its creation and completion, but that cannot salvage this underwhelming effort.