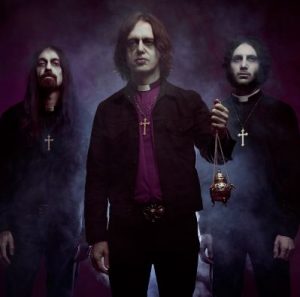 The debut studio offering from With The Dead is undoubtedly one of the most highly-anticipated albums of 2015, especially amongst doom fans who are rejoicing because ex-Cathedral frontman Lee Dorrian has joined forces with two former members of Electric Wizard (namely Mark Greening and Tim Bagshaw). But does this album live up to expectations? Well that is subjective but this is as solid, weighty and bleak as granite rock. With The Dead is a musical behemoth and the emphasis is on monstrous doom, nothing more, nothing less and there is definitely a nod to the earlier Wizard works that Greening and Bagshaw were involved with. The riffs slowly crawl through the thick murky Sabbathian dirge, the drums are pounding and and Dorrian’s instantly recognisable vocals – which haven’t sounded this harsh in quite some time – are a perfect accompaniment to the gargantuan sloth-like sonic assault. Tracks such as, ‘I Am Your Virus’, ‘Living With The Dead’ and closer ‘Screams From My Own Grave’ are truly monolithic speaker-shaking doom anthems that will be sure to get heads banging in a live environment. The production (courtesy of Jaime Gomez Arellano) is powerful but not overproduced and fits the more gritty raw-edged approach. This is not pretty, but doom was never meant to sound accessible and easy on the ears, and if you like your doom metal straight-ahead without any meandering frills then you can’t really do owt wrong in checking out this album.