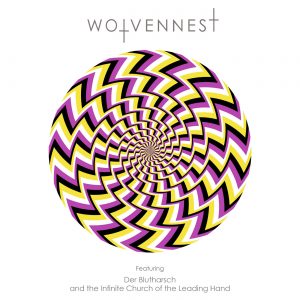 Is this how a black sun looks after you have eaten too many mushrooms? Is that an inverted cross in the band’s logo? Is this martial ambient music meets black metal? This new band, created in Belgium by musicians from various musical backgrounds (hardcore, post-black, non-metal), release an album that’s at the crossroads of many different worlds. And with the Julius-duo (Der Blutharsch) as co-composers, there’s a fair share of dark, repetitive passages between rock and atmospheric soundscapes. With lengthy tracks (three last ten minutes or more, one lasts nearer 20, and the fifth lasts sic minutes), Wolvennest create a dream-like mood, and it feels more than often as if the band have composed the tracks while jamming. But they haven’t lost structure, drawing parallels to another interesting band of late, Aluk Todolo. A very special album, and with such a massive track as ‘Out Of Darkness Deep’, that renders a dark-peplum (if that can even exist) mood, we can be ensured that Wolvennest will be a band to keep more a third eye on.