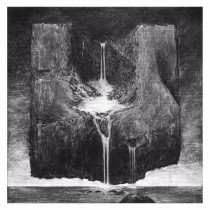 Changing name from Gone Postal and now ‘Spewing Gloom’ under the moniker of Zhrine, this lot are part of the burgeoning black and death scene flowing like a lake of fire out of Iceland. Hewing out a barren and desolate, cold-grey landscape Zhrine carve mountains with this formidable debut.

‘Unortheta’ is an immersive experience that moves between moments of fragile ambience and quaking sonic-shifting barrages of dense blackness. A glacial coldness descends thickly like a mix of Mogwai battling with Neurosian heft and huge tempestuous swaggers that are intricately arranged and absolutely flattening.

Hoary vocals grimly harangue and fill in the gaps with an all-encompassing fury. At times the speed is so frenzied it creates near psychedelic flurries providing a feeling like being caught in a wind tunnel and instantly freezing the listener to the very bones. Atmosphere bristles and to say that Zhrine have really projected the cold, hostile environment of their homeland into musical form would be no understatement.

The bleak and uncompromising stance is controlled and expertly dished out on album and has proved just as effective live to audiences from Eistnaflug Festival to London where the dense sound was partly explained with band members attacking their instruments with bows, making them an even more unique proposition. Beware this one bites!