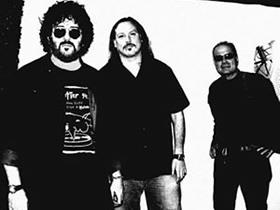 It may be a common thing in jazz or blues circles but there’s no precedent for it in heavy metal. We’re talking about a 56 year old musician putting out his debut LP, more than four decades after he first picked up an instrument. Bedemon, which initially started as a Pentagram offshoot in 1973, finally release their first proper album ‘Symphony Of Shadows’ this year and it means much, much more to drummer Geof O’Keefe than simply making his childhood dreams come true. It’s the culmination of ten years of hard work and grief, his way of staying true to a promise he made to a dear friend whose only passions in life were horror movies and playing guitar. Alas, Bedemon’s founder and one-time Pentagram guitarist Randy Palmer died in tragic car accident on August 8, 2002, four months after he, Geof and bass player Mike Matthews recorded the basic tracks of what would become, a decade later, ‘Symphony of Shadows’. Iron Fist talked to Geof about the sadness and the story behind one of metal’s forgotten bands.

Last time we spoke, it was in 2002, to promote Pentagram’s ‘First Daze Here’ compilation. Back then, you revealed that Pentagram’s alter-ego Bedemon … Read More