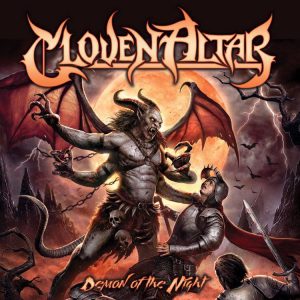 Cloven Altar formed in 2012 from their previous band Spellbinder, in which Dustin Altar played guitar and composed the songs. Based in California, Spellbinder had a female singer Lauren Malechek and drums were handled by Michael McNally, but the band never had a complete line-up and only did one demo recording. After that, the band disbanded due to schedule conflicts and lack of motivation. Cloven Altar was the result of Dustin taking some of the Spellbinder material and writing some new songs while also assuming the lead vocal position. Michael McNally came up with the name Cloven Altar (an obvious but cool rip-off of Cloven Hoof and Pagan Altar). Dustin liked the name so much that he hired his friend Chris Horst to design the logo and recorded a bedroom demo under the name. After showing the demo to Cederick Forsberg (Rocka Rollas, Blazon Stone, Breitenhold, Mortyr, etc.) the two agreed to collaborate on a short EP where Ced ended up playing all of the instruments as well as recording/mixing/mastering the final version, while Dustin handled all of the vocals. Danny K of Stormspell Records expressed interest in the project after Dustin emailed him, and has supported Cloven Altar from the … Read More