JAG PANZER INTERVIEW: “IT WAS THE BEGINNING OF THE ROCK STAR LIFE FOR US” 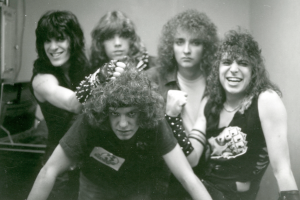 If you’re looking for a name that’s synonymous with heavy metal in its purest, boldest and most untrammelled form, you could do a lot worse than Jag Panzer. Having taken their name from a mis-spelling of a German World War II tank, this titanic troupe’s landmark 1984 album ‘Ample Destruction’ LP stands proud to this day as a deathless pinnacle of heroic sturm-und-drang, bombastic glory and razor-sharp attack, and whilst the Colorado Springs-birthed bezerkers’ history has been filled with more than its fair share of ups and downs in the 30 plus years since, their admirable strike-rate clearly makes them far from one-album-wonders. This is a band who’ve quietly carried one of the greatest singers in the whole genre, Harry Conklin, in their ranks – how many of us wanted to see him replace Bruce Dickinson following his departure from Maiden in 1993? Not to mention Shrapnel shred-legend Joey Tafolla and Megadeth axeman, Chris Broderick. What’s more, despite some recent bad news, there is thankfully no breakup on the horizon. Mark Briody, Jag Panzer’s guitarist and founding member was kind enough to tell us more about both their history and their current plans, while we also caught up with the … Read More