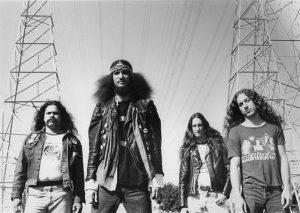 “Based on my past experiences, some people may believe that I’m hard to work with, whereas it couldn’t be more the opposite. I love playing in bands and the camaraderie that goes along with it,” stresses Christian ‘Chritus’ Linderson with a grin. However, one could easily underline that ever since Count Raven’s debut ‘Storm Warning’ came out in 1990 the man has never had the chance to put out more than two albums with the same band! So far that is, as he’s been working lately on the third Lord Vicar third full-length with former Reverend Bizarre Kimi ‘Peter Vicar’ Kärki. But when asked about his other current active band Goatess, he says that he sees it as, “first and foremost, a bunch of long-time friends who just love doing music together and plan to keep doing so for many years.”

The band started off in 2009, first as Weekend Beast, with just him and guitar player Niklas “jamming out ideas for the sake of it.” “We hit it off so well together that the music started to flow very easily,” … Read More