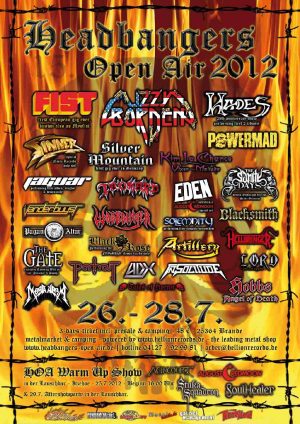 HEADBANGERS OPEN AIR
BRANDE-HORNERKIRCHEN
Arriving on Thursday afternoon to the “the biggest garden party in the world” there is one hour to spare before the first band of the weekend unleashes hell upon us all. Swedish Mercyful Fate fanclub presidents Portrait open proceedings in true old school heavy metal style. They hype up the crowd, get the maniacs to the front and get the beer flowing. Following them are US thrashers Warbringer who bring a different vibe to the stage. Although energetic, powerful and insane, they are perhaps a little aggressive in the lovely daytime sunshine. However, Jaguar nail it. Vocalist Jamie Manton gets into the party spirit by swinging around a broomstick in the air in a slightly booze-fuelled manor, whilst Garry Peppered proves the NWOBHM era is far from forgotten as he riffs through some mighty classics including ‘Run For Your Life’, ‘Warmachine’ and ‘Axe Crazy’. Headlining the night is the incredible Lizzy Borden. Despite prior speculation, the shock-rock glammers are great! Lizzy himself shows one hundred percent showmanship with costume and mask changes, magic and the blood-splattering neck gnawing of an innocent lass during ‘We Only Come Out At Night’. Other hits played during their two-hour set include ‘Red Rum’, ‘Me Against the World’ and an unexpected cover of ‘Born To Be Wild’. A Fantastic end to day one.

The first band to wake everyone up on Friday are Germany’s very own Attic. What better way to clear the hangover than with some more Fate worship and macabre stage props? Old time thrashers Artillery help bring intoxication levels back up. They may be getting on but they would still fuck you up. Unfortunately, the most disappointing band of the festival is Sweden’s Silver Mountain. Despite this being their first ever German show they seem distant, unorganised and as if they don’t want to be there. The crowd is sparse throughout but thickens as the band go into Purple’s ‘Child In Time’ as a tribute to Jon Lord. However, just as they are about to go into the meaty part of the song, they suddenly stop. Why? A band that was a genuine surprise though are The Sanity Days. The ex-Onslaught members play 1987’s ‘In Search Of Sanity’ in its entirety. As the sky darkens, Fist hit the stage. They are sadly mediocre and no comparison to the rest of the day’s highlights; a joke goes around that the organisers accidentally booked the Canadian Fist instead of the British one. Bringing the night to a close is vocalist Alan Tecchio with his most recent line-up of American maniacs, Hades. Despite original guitarist Dan Lorenzo bailing out on the band a few weeks before the show, ‘I Too Eye’, ‘Resist’ and ‘Process Of Assimilation’ sound cracking and end the night on a high.

It’s Saturday and the last day of the festival. The day starts with some disappointing news that French warriors ADX have had to cancel at the last minute. However, watching The Gate (ex-Running Wild) is a welcoming start although it’s quite obvious everyone is waiting around for the classic ‘Chains And Leather’ and ‘Prisoners Of Our Time’. Up next, In Solitude are on top form as usual and are followed, all the way from Australia, by Hobbs Angel Of Death. They are absolutely incredible and a band worth waiting to see. Vocalist/Guitarist Peter Hobbs is as evil as his music, which is real, raw and dirty. This is majorly underrated heaviness. It’s refreshing to see NWOBHM bands reforming and doing exactly the same thing as what they did thirty-odd years ago, and this goes for Black Rose. The majority of their set consists of all old tracks, including the legendary ‘Sucker For Your Love’. A party without Tankard is no party at all, well that point has been proved again. It is surprising the small wooden stage doesn’t collapse. The last band of the fest is ex-Vixen singer Kim La Chance. Some say she looks even better now than she did back in 1988 and she’s certainly got a set of lungs. Throwing in a couple of Sabbath songs, the festival ends with a bang.