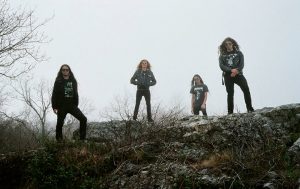 The band’s charmingly raw and heavy self-released CD demo stood out immediately from the increasingly genre specific metal world. Darkthrone’s Fenriz noticed and gave his seal of approval early, which led to a slot at London’s Live Evil Festival supporting Ghost and Angel Witch back in 2010.
Featuring the highly entertaining Tooth Log on drums, main axe attack from Dino Destroyer and lead bass now coming from recent addition, Henry Yuan, aka Sound Mound, who replaced the brilliantly-named Damien The Mexicutioner. Singer/guitarist Ryan Weibust adds a natural, cool vibe and a fittingly underpowered NWOBHM-style vocal.
The eponymous CD demo was followed by the ‘Spider Baby’ single (The Year is One Records, 2010) and an eponymous split with fellow Americans Hessian on the same label in 2011. All of the above caught the attention of none other than Earache Records who signed the band in 2011. The first result of this union is Natur’s meaty and extremely satisfying debut LP ‘Head of Death’.

Hey Tooth, so what’s happening in camp Natur right now?
“Uh, let’s see. We have an album that just came out – it took fucking ages to finish but it’s done. We’ve been kind of laying low a bit. Working on some new material and taking it pretty easy, getting back into rehearsal space and playing around. Drinking beer more, you know, the fun stuff!

Natur are good hanger-outers it must be said!
“We enjoy sitting around and talking shit with a few pops [ed – that’s beers!], who doesn’t? Usually listening to King Diamond and having some cigarettes. It gets pretty swampy at our space so it’s nice to set up chairs outside when we run out of oxygen.”

You and Ryan still do the excellent Metal Inquisition radio show every week, right?
“Yeah, Every Tuesday night we get together in the East Village of Manhattan to drink and play records to all three people who listen to our show.”

What happened with Damian the Mexicutioner leaving?
“Ah yeah, it’s a kinda sore subject. The Mexicutioner is our friend forever but it was turning sour with Natur for a long time before we split from him. Many differences of opinions as far as the vision for the band goes, musical mostly, this is all to be expected working with four minds. But it was getting too much for us to deal with without killing each other. Heavy metal is something we hold too dearly. Everyone needs to be on the same page. That’s it.”

So the debut album is out now. It took a while though, why?
“Well, we recorded the tracks live for the most part. We did eight songs in seven days. It was not the way we probably should have gone about it. We weren’t in that great a playing condition at that time since we hadn’t played together in about a month before we went in to record. Anyway, it was kind of sloppy sounding, we were upset with ourselves and there wasn’t much we could do because we recorded to tape. A few weeks later we were fixing bits and we realised the guitars weren’t in tune with each other. Also the studio is just about one hour from us in Brooklyn. Obviously since we all have jobs and the studio has other clients we couldn’t go in every day. So it took forever but we are happy with it now. It sounds primitive and old like we wanted.”

You’ve been going as Natur for four years or so (and playing in other bands longer) does it feel things are picking for more traditional sounding metal?
“I guess it has been four years since the conception! Fuck what happened? I am really excited about some of the traditional bands that have been coming forward in the past few years. I have been pretty glued to Attic from Germany since the Occvlta guys played them for me. There are some real cool old bands coming back out too to keep us all in line. Who fucking knows what’s going to happen in the next few years with all this stuff. It’s probably going to be a shit storm of bullshit like everything else after it turns into a trend. But until then listen to Amulet [ed – Marek, how much did you pay him to say that?].”

So you just did a fun looking tour with Occvlta in the US.
“Yes, it was the coolest tour we’ve been on. We had a really solid gang. We are huge Occvlta fans so to host them on our side was an honour. We also enlisted Manute Bol as our staff photographer and party retard. It was loads of laughs. We learned that Dino can swim long distances underwater while smoking a cigarette. Pretty amazing stuff! Henry died one night. It was eventful. Manute is making a zine of the whole trip which should be out soon. We need to go to Europe with that bunch again. Helluva crew!”

Wait, Henry died?
“Yeah, he partied a little too hard at the Crayola House in Harrisonburg Virginia and was pronounced dead the next morning. He was supposed to be Weibust’s co-pilot for the next leg of the trip but he couldn’t mutter a single word for at least 24 hours. It was a sad day. It will be illustrated in Manute’s zine I’m sure.”

What about Ghost? You guys were fans very early, what do you think of their meteoric rise and so on?
“Hails to Ghost, fucking great stuff. We all fucking shit our pants at the first Live Evil Festival. It was pure magic! And since then I’ve seen them probably five times and it’s fantastic every time. I think that their mission is almost complete in spreading their music to the general population. This kind of shit doesn’t happen anymore to rock bands. Especially ones with cool songs and a cool image. Hail the Papa!”

Next up for Natur?
“We’re trying to get back to the UK and bang skulls with you and our other fucked up brothers and we’re going to continue to write new songs and play our instruments with guts and passion for heavy metal!”