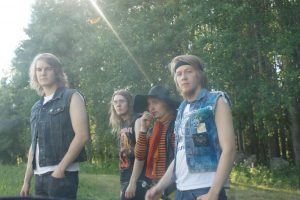 Like fellow retro-obsessed bands Speedtrap or Evil-Lÿn, Eetu doesn’t deny their eyes are set on the golden era of the genre but according to him there’s more than meet the eye: “Our music is greatly inspired by 1980s heavy metal but we’re definitely not trying to sound like bands from that era. We will not aim intentionally for shitty or old-sounding production, we just want to sound organic. Apart from vocals and some guitar solos, our debut demo was executed live in the studio. That’s how we got the authentic sound!” Eetu says that around the time of the recording, the band had already written ten songs but “put on tape the older ones first, apart from the title track that we threw in because we wanted to demonstrate the band’s sound more precisely and our ability to not only be fast-rocking and face-melting but also slower, epic and even a bit doomy.” They should hit the studio again later this year as they’ve received “few [label] offers already” and hope to appear on selected European underground festivals next year.