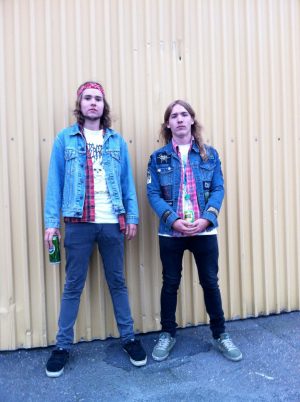 Let’s let Oslo’s grind youngers Gouge have the first words. “We are Gouge, we play music. We listened to Repulsion a lot and formed Gouge because we felt we had to. So Repulsion is a big influence and Dr Shrinker, Autopsy, Nihilist and the Funeral demo.”
Gouge arrived on the scene recently with a cast-iron demo that is arguably one of the best ‘grind’ debuts released since the old days. Herman plays drums and Christoffer plays guitars and sings. Their first gig was actually on the mid-September day in 2012 that Iron Fist and Gouge had a chat. The two core members employed Jonas Bye of Mabuse for bass duties for the live show and they don’t plan to play many gigs but a full length album is halfway finished and likely to see the light of day in 2013. Until then they, “will just keep on working, drinking beer and playing music.” They’re a great example of the new generation bringing unshakable energy into the extreme music scene. They naturally employ a fresh approach, which is entirely unprejudiced by modern versions of our music. They only know the greats and use a similar sound to the classics to play new material as if their life depended on it. Get hold of the demo and try and catch these kids live if you can. We’ll leave the last words with Gouge too. “We’ve got our rock ‘n’ roll haircut. We’ve got our rock ‘n’ roll jeans. Just to make us feel like someone we’d rather not be. We don’t care if you laugh at us, it’s better than being ignored. Anyway, we’re used to it, that’s what fools are for.”