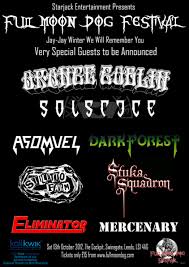 FULL MOON DOG FESTIVAL
LEEDS COCKPIT
Once again held in memory of Asomvel founder and frontman Jay-Jay Winter, the second annual Full Moon Dog Festival also honours the spirit of the ’80s, or as the organisers themselves put it: “The days when hordes of metal fans would cram into local venues to see their favourite bands for a meagre couple of quid and ‘social networking’ meant actually getting off your backside and leaving the house!” I’m sure we all raise an iron fist to that.

In what’s a less than ideal start to the day, last-minute ‘logistical difficulties’ prevent your humble correspondent from witnessing either Mercenary or Screaming Eagles in what was surely their unfettered glory. It falls instead to West Midlands trad metallers Dark Forest to open our account and, as one of the most promising UK newcomers of recent years, they do not fail to deliver. Decked out in some choice old-school clobber and armed with a luridly-hued and suitably spiky selection of vintage axes, they launch into a scintillating set of heavy/power somewhere between the NWOBHM and the European trad scene of the same era. There are touches of contemporary power metal too, but they steer well clear of anything hardened DragonForce devotees would “dig”.

Roaming the zone where trad metal and thrash collide, Welsh five-piece Triaxis kick up quite a storm. Think Priest, Annihilator, Megadeth and Testament, woven through with buckets of melody and topped off by frontwoman Krissie’s soaring vocals. A powerful performance.
It’s back to basics with Lancaster’s Eliminator who dish up a tasty stew of ’80s metal and ’70s hard rock. If Dark Forest are meat ‘n’ potatoes metal, Eliminator are pork scratchings and a pint; rougher, readier and with a bit more spit ‘n’ sawdust about ‘em.

From Yorkshire via New York, local louts Stiletto Farm make for a marked change of pace, their glammy punk/metal hybrid at times recalling the likes of The New York Dolls, The Dead Boys and The Dictators. Even at their most effervescent, however, they simply can’t compete with the splendour of Stuka Squadron and their ludicrous but loveable Nazi Vampire shtick. Behind all the blood and battle, the fearsome fivesome are rapidly developing into a seriously good ‘proper’ metal band and theirs is one of the top showings of the entire event.
With their Motörhead-fuelled, heavy-as-hammers bludgeon, Asomvel were only ever going to kill and kill they do. Fired by the passion of the occasion, they stage a truly crushing display that would have made the late Jay-Jay extremely proud. His band are far too good to have been allowed to pass away with him and no doubt he’s looking on with pride.

If you wanna get a party started, start it with Orange Goblin. The leadweight London crew are always a guaranteed good time, but tonight they’re off the cliff. Whether doling out the stoner vibes of their earlier tunes or dealing fistfuls of purest steel, it’s the perfect end to a triumphant celebration of Great British metal.