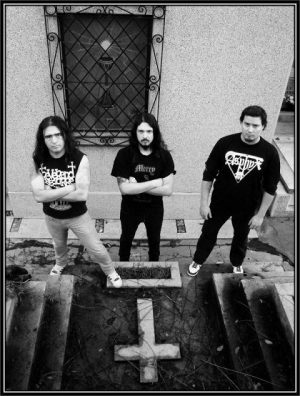 “It’s not something you really sit down and decide,” admits Procession‘s Felipe Plaza Kutzbach when asked why he started playing a solemn and slow form of metal in a country mostly known for its rabid and primitive black and death metal scenes. “When I first heard Candlemass ‘Tales Of Creation’, Trouble ‘Psalm 9’ and Solitude Aeturnus ‘Beyond The Crimson Horizon’ in 1997 I was just a teenager obsessed with speed, thrash and death metal and it changed my whole perception of heavy metal. As I grew up and started discovering real life I realised that all those things that tormented me, disturbed me or pleased me had to come out in some sort of form, finding their way in the verminous, crawling, slow, heavy and dark music. Considering that back in 2007 there were no bands playing ‘classic’ doom metal music in Chile, right after we organised Candlemass’ first gig in Chile, we decided to make an unpretentious demo tape, started getting some feedback, an European offer for a vinyl release, etc… I guess we took one step at a time, were in the right place at the right time and realised that as unambitious and as unpretentious as we were, we could actually make something transcendent, if not important, out of it.”

Being huge Candlemass fans – they used to include the classic ‘Solitude’ in their earlier sets and there’s a video uploaded on YouTube of them performing it in Stockholm in January 2011 with Messiah Marcolin on vocals – one could have expected them to dig into their heroes’ repertoire when the time came to choose a name. “Hey, indeed we could have since ‘Samarithan’ is my favourite Candlemass song,” admits Felipe. “But then, why we chose Procession instead is pretty obvious. Of course there’s a religious connection in terms of the dedication and devotion we pour onto what we do; I like to refer to it in the ways of a constant pilgrimage, through different gates, onto different dimensions; a permanent journey into the multiple states of the self.” No wonder then that they join the rest of their doom cult in making sure the sky is still filled with grey clouds and heavy rain when they ponder over life and death, of course in a sombre and reclusive manner.

“Death is fascinating and relieving, the sooner you relate to it, the better, because we all die a little bit everyday, on everything we do, which means death can be ugly and uncomfortable or the most beautiful thing ever, because of it’s omnipresence. But one thing is certain… death is the ultimate spot of all beginnings and all ends, and that terrifies as much as inspires. We just try not to be so evident and give the listener the chance to unveil signs and codes in the form of stories, symbols and analogies.”

From their first years as a band, Felipe has only good memories to share, even if most of them are linked with shitty food, uncomfortable couches and DIY ethics. Still, despite the harsh conditions, witnessing a small underground Chilean band getting to do what most of his fellow countrymen dream of must have raised a few eyebrows: “As soon as we got our first recording contract with Germany’s Iron Kodex Records for a vinyl EP in 2008, we started contemplating touring Europe. Yes, it felt almost too early for us but we weren’t really worried, nor afraid. Like with most of our decisions, we just went for it without much second-thought. That tour was basically self-produced by the label and pretty low-key: five people driving around in a van, playing almost for free and spreading the plague. As for the potential jealousy that opportunity might have created; truth be told, what we care the most about how we relate to our own scene in Chile is that, at least of the labels or bands we support and care for, we’re on a constant mission: we talk about them, we bring their material and spread it around on tour. We’re all comrades when we’re on the right path. I mean, have you heard of Force Of Darkness? It’s probably the kind of band that can be only from Chile, believe me…”

Still, maybe realising that things couldn’t move forward as he wished while living in South America, Felipe elected to move to Sweden about two years ago after their first proper European tour. To make possible further live ventures on the old continent, he then enrolled Uno Bruniusson from In Solitude on drums and Jonas Pedersen of Strychnos on bass, while still working at a distance with original bass player Claudio Botarro Neira who remains in Chile. Last month, Procession released through High Roller Records a new 10-inch EP, limited to 500 copies, containing the future album track ‘Death And Judgement’ on one side and on the other, an exclusive cover of ‘Nightsky’, originally recorded by cult ’90s Russian doom band Scald. “We wanted to commemorate 15 years since Agyl’s early departure and to remind people that back in 1996, five unpretentious Russian musicians recorded one of the best doom metal albums of all time,” Felipe insists.

Sweden has become so much his second home that while the band’s first proper full-length ‘Destroyers Of The Faith’ (yep, guess to whom that title is nodding to) was recorded in Santiago, its follow-up will be given birth to in the middle of the cold Scandinavian winter. “This time around, we’ve decided to record this album by ourselves and get Patrik Engel from Temple Of Disharmony studio in Germany to mix and master it,” Felipe explains. “We first tested that new way of working on our recent ‘Death And Judgement’ EP and it turned out great. As we speak, we’re rehearsing in Uppsala and plan to move all our gear and equipment up to a house in the woods of northern Sweden this winter.” Set to be called ‘To Reap Heavens Apart’, it is slated for next spring: “We’re shooting at a March or April release date. It will include six tracks (‘Damnatio Memorae’, ‘Conjurer’, ‘Death And Judgement’, ‘To Reap Heavens Apart’, ‘The Death Minstrel’ and ‘Far From Light’) and will have a total running time of approximately 42 minutes. It’s pretty much a free fall journey inwards toward the self, represented in different moods and colours. Take the title track: it is a straightforward nine minute monster where I think we revealed some of our most challenging material to date. Musically, it lies somewhere between Black Sabbath, Candlemass, Solitude Aeturnus, Solstice with an added mandatory dose of Iron Maiden and Judas Priest. It’s been already described by a friend of ours as a ‘devastating fist in the face of everyone who wants to remove metal from doom metal’ so I guess we’re on the right track.”