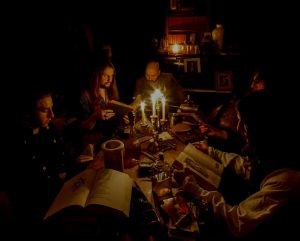 “Doom for me is the purest form of heavy metal. Bands like Trouble and Candlemass were at one time just called ‘heavy metal’, without the need for the ‘doom’ label. What we do harkens back to the early roots of heavy metal in its rawest, most satisfying form. A simple, powerful riff can create so much more intensity and atmosphere than any fast technical playing.
“Black Magician formed a year ago. I was complaining to a friend when my previous band didn’t go anywhere, and asked him if he knew anyone around who was into the same stuff and wanted to do more than drink beer in the rehearsal space. He recommended I speak to Kyle [Nesbitt – guitars] who was looking to get something started. I had seen him around and he certainly looked like the kind of fellow eccentric I would get on well with. I approached him at a gig and a drunken rant about old heavy metal and doom ensued, and that sealed the deal. After that, others answered the call.”

And so it was done. After several months the newly formed band put “two demo tracks up online just to get the name out,” says Liam and it became obvious from the onset that he and his cohorts possessed something special because they received a few label offers solely on the strength of those two tracks. Ultimately, though, they decided “to wait until they had something more substantial.”
The “something more substantial” would become their fantastically mesmerising five-track debut full-length, ‘Nature Is The Devil’s Church’ (Shaman Recordings).
“The songs were written in a matter of weeks but continued to expand as we jammed them and played live over a few months. We had the songs written for about seven months before we decided to record them.”

Of the recording Liam says, “We recorded the album over three gruelling days. We played a gig after the first day in the studio and continued recording for the next two days with little rest. The recording captured the grim work ethic and strain we put ourselves through.”
Their toil is the listener’s reward and two things stand out on ‘Nature…’: Matt Ford’s eerie and ubiquitous Hammond organ and the strong sense of sincerity oozing from the recording.
“The Hammond is vital to our sound,” says Liam. “We take influence from ’70s prog and folk as well as heavy metal. The Hammond is just as important to us as the guitar. Bands like Atomic Rooster, Caravan and Arzachel utilised it to create such sinister atmospheres and total freak outs. It can be used to create more of a ritualistic vibe. The Hammond will be more predominant in future recordings. We are aiming for some ELP dagger in the keys antics when we have figured out how to travel with it.
“I feel you should always be sincere about any artistic endeavour. It would be pointless to devote ourselves if we didn’t have a strong connection to the ideology of the band. We have all been passionate about the themes explored in the music a long time before the band was formed.”

In a pre-release promotional quote Liam said ‘Nature…’ was “an ode to brigands, boggarts, witchcraft and the dark British psyche.” So does he consider Black Magician a true “occult” doom band and are “occult” and “Satanism” one in the same in his mind? “Occult” is a term thrown around quite a bit in today’s metal scene. So much so, it is almost as if the word has lost its power and even its original meaning.
“I think a lot of people and bands, use the term ‘occult’ without really knowing what it means. It’s not about drawing pentagrams on your guitar and painting your fingernails black, it’s not Halloween. ‘Occult’ and ‘Satanism’ is not the same thing. The ‘occult’ exists outside of any association with Christian iconography. We’re interested in exploring those ideas, but we don’t consider ourselves an ‘occult doom’ or ‘Satanic’ band.
“The album’s title, ‘Nature…’, reflects a Christian view of the wild and unknown dark forces of nature and old religious practices,” says Liam. “The church has always feared and condemned old practices and beliefs. If nature is the Devil’s church, we would reside quite comfortably there. Imagine Sgt Howie’s disgust when he arrives on Summerisle and you get the picture [Summerisle is the fictional island of the Western coast of Scotland featured in the 1973 cult film ‘The Wicker Man’].
“There are still places very close to us that retain old customs and are completely untainted by modernity. The village where I grew up still had a Morris dancing site up until a few years ago. Areas of Lancashire, like Pendle, still hold their heritage very sacred and as we spend as much time as possible in places like this we cannot help but be inspired by the atmosphere and surrounding countryside.”

Just what is it about the British Isles that plays upon people’s fancy for fantasy?
“The landscape, British folklore and literature, Arthurian legends, for example, are the bread and butter of heavy metal. The best fantasy and horror stories are grounded in British legends and history, even Poe and Lovecraft were total Anglophiles. British mythology has been influenced by so many different cultures that even those who consider themselves well-versed in the subject will always find something new and mysterious.”
As for their historically based lyrical themes Liam admits, “Plenty of doom and heavy metal bands deal with similar lyrical themes. I feel we can connect with these ideas on a more personal level as they are part of our own heritage. We couldn’t take ourselves seriously writing redneck sludge metal when we have no connection to that scene or those themes. Looking to the past is, in a way, a form of escapism. We might look to the darker side of history for inspiration, but on some level it’s still a romanticised view of the past which we hope can take the listener somewhere else, away from the mundanity of modern life.”

Another way through Black Magician to escape “the mundanity of modern life” is to seek out a copy of their self-printed, self-distributed ‘Black Magician Almanac’.
“The almanac is a collection of stories, folklore and historical anecdotes which influence the band in some way. We want as many people as possible to be able to read about the things that have inspired us since we were children. Issue Two is on the way, and will be available at future gigs. We wanted it to hark back to the era of the metal zine, where you’d go and see a band then pick up a zine to find out more. If the band didn’t exist we would be probably be exploring these themes for other non-musical projects.”