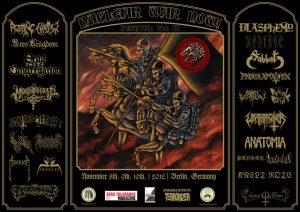 So here we were, apostles at the altars of madness. And thanks to a queue snaking the building’s length, Knelt Rote are missed by most. Anatomia quickly make up for any loss and summon a good start to the festival with their deathly doom. These Japanese magicians have a great sound for so early on and put on an impressive display, knocking out last night’s pre-show cobwebs. Pseudogod’s unholy black death calls the masses once again, but dogged by sound problems from the start, they fail to recover and are plagued until the end with a high end sound, which is inaudible from certain parts of the venue, and no doubt the stage. A real shame, as they are one of the bands with high anticipation surrounding them. Onwards we march, into the shadows, as Antediluvian take us further down into hell. Their ominous sound reverberates from the walls like a swarm, surrounding everything within their dark veil. Clad all in black, their presence is akin to their sound; one of the weekend’s most crushing performances. As the day becomes more chaotic, so does the music and the Italians in Blasphemophagher deliver it by the truckload. Their frantic black/thrash gets the biggest reception from the audience so far, causing the centre of the crowd to erupt in a drunken, flailing mass of arms, hair and beer. With a chorus of “Black Witchery, Goat Semen, Blasphemy!” being bellowed by the crowd, they are without a doubt mainstays of the festival. Wrathprayer is a name many were unfamiliar with until recently, but with the release of their first album they have been lapped up by many, and rightly so. These Chileans create such a demented cacophony of sound and they perform with this same darkness in Berlin. On the note of NWN! mainstays, Morbosidad have been on the label’s roster from the start and have been churning out their South American styled black/death for just about a century. This experience is evident as Tomas Stench controls the crowd and whips them into frenzy for a cover of Archgoat’s ‘Hammer Of Satan’ with none other than Angelslayer on vox. And now, for the final invocations, we are transported to Hellas. It’s a surprise the building is still standing after Dead Congregation‘s show here two years ago for NWN! #1, yet the biggest miracle is how it’s foundations aren’t shattered after what can only be described as a bulldozer repeatedly rolling over your face. Dead Con, armed with the best sound of the weekend, absolutely decimate all with their brand of thundering death metal. With a set list of now classics, a couple of new songs and a perfectly executed cover of Lunatic Of God’s ‘Creation By Deicide’, they put on what could well be the best performance of the weekend.
Once the bombs begin to fall, they don’t stop. After Dead Congregation level the joint, Rotting Christ stride onstage to crown the evening with thorns, drawing liberally from ‘Thy Mighty Contract’ as well as showcasing a few more obscure gems. Sakis’ bombastic stage banter urges the crowd along, and for the most part, they comply. These Greek OGs may have dulled their edge a bit over the years, but tonight they make it clear that their roots remain as bloody as they ever were. Non serviam!

Feeling as rough as can be, the legions slowly sift their way back in for day two, hoping to procure an antidote for the night’s antics. A smash in the face from Poland seems to work suitably well for most, as Bestial Raids storm through an absolutely ferocious set. Adorior take that flame and burnt it even brighter, setting the day truly in motion with a fierce bite, violently catching the crowd off guard. Despite an early slot for such an established band, they perform like headliners with power and determination. Embrace Of Thorns are a band that improve with every step, and today is no different. Their sound is crushing and the band themselves have never sounded tighter.
Black Witchery cast their arcane spell and it’s mesmerising. Why is this band so evocative? Because they truly live what they believe, they’re pure unadulterated maniacal intensity!
Ares Kingdom are a band with a superior wisdom few artists possess, they tear into Slaughter Lord’s ‘Die By Power’, then ‘Descent Of Man’ from the masterpiece ‘Incendiary’ caresses us with original sin. ‘Act Dead’, originally by Mefisto, from the forthcoming ‘Veneration’ is given the Chuck Keller solo treatment and gets us pumped! After giving our ears a good ravaging they wrap up their set with ‘Iron Clad’ [fuck, I love that solo] and we ‘live to fight another day’. AK has more talent and prestige in their piss than an army of lesser men HAIL!
Proclamation are the bread and butter of NWN, they do what they say on the tin, and do that very well. They execute their sound well and get a big response without any hiccups to mention; a solid show. Sabbat are a band a huge majority of people are waiting for, and the wait is well worth it. Despite having an off drum sound for their style, they rip through their set with absolute passion, both band and crowd feeding off each other’s enthusiasm. At the sets end and at the peak of the crowd’s hysteria, Gezol takes his guitar and smashes it to pieces, pushing the whole performance over the edge.
There is an intensity to Revenge‘s performance tonight that is frightening. The menacing build up of ‘Us & Them’ leaves us in no doubt of the power that is to come. ‘Banner Degradation’ is the perfect choice to lead us into their violent cover of ‘War’ by Bathory! Some say Revenge is a band that you have to be in the mood for live, well I’m always in the mood! Their ferocious speed and immense talent is mind blowing to watch. ‘Blood Of My Blood’ summons a red mist the colour of battle rage that clings to the air as these warriors storm off the stage… Unholy Fuck!
By now my blood is boiling, there are shivers running down my spine as Black Winds kicks open the fucking gates of Hell and out strides Blasphemy. The War Command is called! Having ‘Goddess’ lead straight into ‘Weltering’, then ‘Blasphemy’, then ‘Fallen Angel…’ is almost too much for my heart to bear. I remember banging to ‘Demoniac’ and looking around to the glorious sight of wild abandon around me. By the final ‘Ritual’ the same words are burning in my heart and won’t stop burning!

Blasphemy from the beginning

Blasphemy in my heart now

Blasphemy til the end of time…

Changing of the tide… Black Moon will Rise!

There is no band in the world that makes me feel more alive, more free and that fateful night at NWN, I reckon I wasn’t alone. Some are born of wild fire and we made magick this weekend in Berlin… for whenever the pack is together the world will bleed and the world will burn!