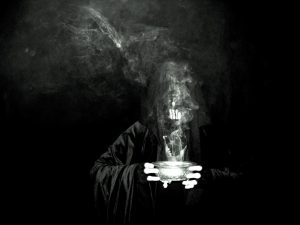 A mysterious and ancient curse resides in the bowels of Catalonia, or so it seems when listening to the putrid expulsions of 13th Moon. They sound like the dank, cobweb-infested halls of death; like a Lovecraftian nightmare. In a similar way to fellow countrymen Teitanblood, it appears that this band goes far beyond the act of simply “making music”.
Little information can be garnered about this band, save what has recently been advertised online by Exitium Productions, who will be putting out their demo ‘The Pale Spectre Over The Worm’ on cassette in early February. All that can be sourced are a couple of tantalising videos comprised of murky found footage of catacombs, nocturnal witch cults and desolation. The available tracks show such promise that 13th Moon will no doubt become a feared name in the world’s underground scene.
We tracked down main man Naashahas to talk about the impetus behind this horrid black/death hybrid, and to shed light on the future. He replied in a suitably obscure manner: “The chthonic call from the depths of the earth-mind.”
Inspiration for the name derives from a wealth of interest/practice in the occult: “The Moon represents our dark mother Lilith-Hecate-Lamashtu-Kali… her most violent, dangerous and instinctive way, as well as her beauty that shall slay the one who looks upon her veil of void… the manifestations of the demonic feminine.” Naashahas continues; “The number 13 is represented by the physical and spiritual Death, the burning tunnel leading us beyond the limitations of life to the primary, hungry Void. Many of my nocturnal astral-necrophiliac ceremonies take place on the 13th night – the reason why I considered the name to fit perfectly to the whole concept.”
With a polished full-length in the pipeline we are promised an “amazing edition” of the demo tape in the meantime, with all copies being “shipped in small velvet bags” and the first 20 copies including “pieces of human bones, grave dirt and ritualistic incense.” If that isn’t enough to set the tongues of kvltists wagging, I don’t know what is! A must for fans of Teitanblood, Morbid Angel and early VON.