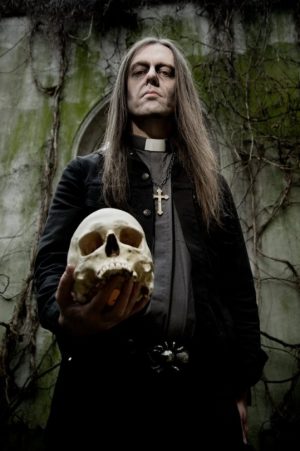 Late last year, when it was announced that seminal grindcore legends Repulsion were making a rare trip onto UK soil in May there was a wave of excitement at IFHQ, but upon further inspection, who was this band Septic Tank billed as opening up? The press release spoke of Replusion’s own Scott Carlson being a member alongside Cathedral men Lee Dorrian and Garry Jennings alongside music producer Jaime Gomez Arellano. We had to speak to Lee to get the lowdown on this mysterious band that have been under our radar since 1994. Lee tells the story of how it came about: “Well, it dates back to the time that Cathedral were signed to Columbia, we had a lot of line up changes and due to the money we were receiving from the major, we took advantage and hired people from bands like Pentagram and Trouble, people from all our favourite bands really. Being a massive Repulsion fan I hired Scott to play for a while too, until we got dropped and we couldn’t afford to fly him over anymore. During the time Barry Stern [former Trouble drummer, who passed away in 2005] was in the band. I found Scott was a big fan of American hardcore and Discharge and stuff like that and one night, as I occasionally do, I pulled out a box of hardcore 45s. The main stuff I’m into is pre-’86 really, before the so-called Brit-core thing happened. We had a night of listening to stuff like Mob 47, Anti Cimex as well as some Japanese bands like Lipcream, we just got majorly drunk and had a blast. So, the next day in the rehearsal room – this was about 1994 – Scott and Barry were due to go back to the US the next day and we went into the studio pretty hungover. We had a spare afternoon so we thought we’d do a hardcore jam. We came up with a bunch of songs really fast, in the tradition of Siege and Crucifix and we thought we’d record a bunch of them. We ended up writing about ten songs in four hours. The problem was, we realised later that the tape was blank as Gaz hadn’t recorded it properly!”

Lee continues on with how things have come back together for Septic Tank nearly 20 years later. “We had such a blast doing it so it was unfinished business really. We always wanted to do it again and do it properly. Scott came back to Cathedral a year and a half ago and we told him, ‘when you’re in London, we’ll have a go at doing Septic Tank again’. We had some spare time in the studio where [Cathedral producer] Gomez works, so we thought, he’s a drummer and can play fast, he can give it a go. We just had one afternoon in October and came up with four songs in a couple of hours. We literally wrote the music and recorded them in about four hours, we did a whole EP in an afternoon.

“It’s quite liberating working in this way, as in our other band we spend so much time on our songs and our lyrics that you can’t see the wood for the trees. Sometimes you get so far down the road with the contemplation of it all it’s a bit of a head fuck, but with this it’s like ‘that’s it, it’s done and we’re never going back to it’. It’s nothing particularly original, it is what it is; short blasts of noise, raw energy and raw aggression. I was so into that music back in the day that it’s never really left me, it’s still in there. You never really have to think about it that much, the same kind of thing goes for all of us, except Scott and Gaz have a more metal background. There’s metal in there too though, like Slaughter from Canada or Cryptic Slaughter. It’s just good fun as much as anything else. There isn’t a big picture, it’s more of a reaction to an apathy and complacency in myself as much as anyone else. To me the horrors of everyday life are scarier than anything to do with Satan, as much as I find that occult stuff interesting. Daily life is more sinister and it all filters through this sound of hatred. It’s a release and an expression really, especially for a bunch of blokes our age, its not like we’re kids anymore!

“We’re having a really good time doing it, it’s such a great buzz. Making things up on the spot without thinking about doing it and going, ‘Yes! That’s it lets go’. We’re releasing a four track 7” on a Japanese label called MCR, they’ve been around since the ’80s and did a Napalm Death/SOB split flexi years ago, which I felt was in keeping with the spirit.” Lee ponders for a moment on how the future for Septic Tank might pan out. “I dunno where it’s gonna go and where it’s gonna end,” he admits. “It’s not easy with Scott living in the States, but we’ll do it until it loses its buzz and energy. We’d never even planned to play live really until this Repulsion show came along. We’ll take as it far as it goes, it’s not going to go on for years and years. Mind you I said that about Cathedral”