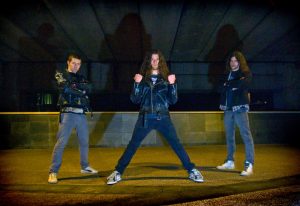 It seems fitting that in the same issue that we celebrate the legacy of Voivod that we also delve deep into DECEPTOR, a power trio from London, England. Though not musically similar to the Quebecois maniacs, there is a direct line between Voivod’s dystopian vision and Deceptor’s. Newly signed to Shadow Kingdom and with a new album ‘CHAINS OF DELUSION’ ready to be unleashed onto an unsuspecting world, Sam Mackertich (guitars, vocals – with a scream to beat Halford’s!), James Ashbey (drums) and Paul Fulda (bass, vocals), are injecting new RAM into thrash’s overloaded motherboard.

Having formed in 2005, you pre-empted, supported and have now outlived the mini UK thrash boom. Do you miss the scene’s peak?
James: “I miss the sense of community and the great times that were had amongst friends. The scene at large never had a huge amount to say musically, and those bands who were simply rehashing an already cloistered sound have predictably fizzled out, but I still value all the friendships that resulted from those years.”

You must be happy with, might we say excellent, new release ‘Chains Of Delusion’ and the Shadow Kingdom deal?
Sam: “The stars really aligned for us, we managed to record the EP in a four-day stint with our good friend, and heavy leather alias Jamie Elton [also of Amulet]. A man of many, many skills. It was written over a much shorter time span than [last year’s] ‘Soothsayer’ EP, so the tracks feel more unified. This record is more about blowing up amps, and a more masculine butch figure. Shadow Kingdom releasing it is the metallic icing on the iron cake.”

Does it bother you to be bracketed as Space Thrash?
James: “All gimmicky sub-genres are lame. Space Thrash applied to Deceptor is absurd as we have, at most, two songs that reference the theme. I think bands should always avoid creating artificial labels for their sound. Of course you can’t control how others decide to describe you, but it’s best just to get on with creating the music you like and let others strive for novel phraseology if they must. Also, if bands hem themselves into one conceptual angle above all others, they’re almost always shit as they tend to rely on it as their USP and start believing their own hype.”

You’re all obsessed with Agent Steel, right?
Paul: “Agent Steel is an interesting band to bring up after a question/answer about gimmickiness! Now, it’s clear that Agent Steel material has always had a very strong vein of Alien mythology running through it. However, to me this never came across as a gimmick – the sheer unstoppable force of the music and the unquestionable belief of [vocalist] John Cyriis in the mysterious forces from the stars imbued it with the credibility to carry the theme.”
Sam: “I first saw Agent Steel in 2003 supporting Exodus and Nuclear Assault, at a show titled Bonded By Metal. Even with newer vocalist Bruce Hall, they managed to blast away the main acts, bands we had all gone there lusting for. Agent Steel have become very dear to us and our close circle of sceptics over the years, some of us just saw in 2013 listening to ‘Unstoppable Force’. You can’t stop it, it’s already coming.”

Speaking of space, isn’t Paul studying something ‘astro’ in the US right now? What exactly does he specialise in?
Paul: “I am indeed researching something ‘astro’ in the US right now, although it’s a little far removed from peering through glass tubes towards the sky. As I write this in fact, I’m at a science facility in an ex-nuclear test facility in Hanford, Washington. The project I’m working on, L.I.G.O, is aiming to make direct detections of gravitational waves from distant cataclysmic, astrophysical events, such as neutron star-black hole mergers and supernovae. In a strange coincidence perhaps, there was actually an ultra-obscure Russian death metal project called L.I.G.O, who took their name and a sizeable portion of their lyrical inspiration from the 4km long high-power infrared laser interferometers on which I now work! I’m just a small part of a large collaboration here, but we are aiming to make a conclusive detection within the next five years. Keep your eyes peeled for it in the human news.”

Does your science brain factor into Deceptor’s lyrics at all?
Sam: “Paul’s scientific dabbling actually lends surprisingly little to our output. Our two space orientated tracks have mainly been James’ effort, however we all have input to the themes, music and lyrics. Take ‘Kursk’ on the last EP, the riffs sounded so aquatic and submerged, it dug up our childhood memories of seeing the submarine going down on the news. We love a concept that reeks of steel, without reverting to obligatory “Thrashing Death Fire at the Sinner’s Gate of Satan’s Hellpike Hellpik” – not that the three of us don’t love those songs!”
Paul: “Unlike the aforementioned Russians I don’t feel the need to write about the things I work on; in fact I prefer to keep my two lives as separate as possible. Having said that, when we are writing lyrics for some of the more technological songs I find the odd specialist word here and there can add a little extra flavour to the quark-gluon soup.”

What about fantasy influences?
James: “Gene Wolfe’s ‘The Book Of The New Sun’ series is masterful science fantasy; the Empire trilogy of Raymond E Feist and Janny Wurts deserves more love; everything from the unrivalled pen of Lord Dunsany; Clark Ashton Smith for that unique dose of verbose cosmic terror; Algernon Blackwood’s short stories, which capture a perfect sense of foreboding and reveal Nature in her most awesome, terrible aspect; William Morris’s fantasy writings to escape into unbridled realms of pre-Tolkien mysticism; and of course, take The Silmarillion to your grave.”

James, you edit the excellent metal and fantasy literature zine ‘Cimmerian Shadows’. Can we expect a third issue soon?
James: “Not soon, no. I have intentions to start compiling issue three but other things have taken precedence up until now. There are many worthy bands I would like to contact though, so hopefully the cylinders will fire up again before too long. Fellow zine editors Flav and Luis (Devilment and Hell Bent For Metal respectively) are putting me to shame with their prolific output, so look out for their new issues soon.”

You also promote shows in London, like Manilla Road recently. How is the state of the UK scene right now?
James: “If you mean the gig-going scene for traditional heavy metal, it’s a total embarrassment by continental standards. But band-wise there are a few embers still glowing in England’s old furnace – most convincing of these include Satan, Hell and Desolation Angels. I’m also excited to see whether the re-formed Legend (from Jersey) still have what it takes.”

By continental standards, you could also mean Greece, right?
Sam: “Metal passion is rife in Greece. James had infiltrated previously, attending the Up The Hammers festival. Word got back to our underground HQ that the Athenian fistbangers were keen on a live show, so we fired up the refurbished wreckage of the Kursk and took a vacation away from the daily schedule of experiments, sex and torture. It couldn’t have been more enjoyable, and our continued thanks go out to Mike and Nick from Convixion. Eat metal, malakas.”

It must have been an honour to play with Dark Quarterer recently? That was a killer show.
James: “Being involved in an anniversary show for Dark Quarterer’s self-titled masterpiece was humbling. I remember getting chills even in soundcheck when they started the ‘Gates Of Hell’ intro. Their show was a schooling in why heavy metal is for life.”

One of your live collaborators is the talented dancer Missy Philips. She’s pretty amazing and it always fits better than one might predict. How did you find her?
Sam: “Being in a heavy metal band tends to attract wild, cavorting women, dense stage smoke and furious laser beams. The heavier we’ve got over the years, the more frequently it seems to happen. Missy has been thoroughly enchanted by the deceptive rays emanating from the stage, and her reaction is unpredictable, yet mesmerising. She was already coming to one of our shows with a friend of mine, and I just asked if she wanted to join us on stage. Next thing we had choreographed an interlude with a synthy track lifted from the ‘Manhunter’ soundtrack. The rest is erotic history.”

Speaking of furious laser beams, congrats on the hilarious and cool ‘Heatseeker’ video, it sums up the band’s statement of intent.
Sam: “There is nothing unusual about our music video, it captures us in our undisclosed lair, underground, experimenting with lasers and hot metal. Consider it a dressing down to you surface dwellers, with your central heating and tamagotchis.”

Final question. Is man doomed?
James: “I’ve yet to decide. One day I shall rule upon his fate; for now I will sit back and watch the clockwork mistakes of each passing generation, shrugging at man’s petty masterpieces and indulging in sonorous mirth when, at last, he heeds oblivion’s call.”