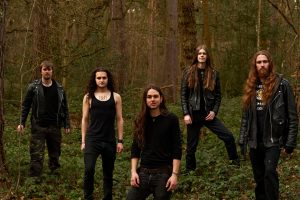 From the mean streets of West London come Hundred, a band with a passion for balls out NWOBHM and a love of the old gods. With a style influenced by Iron Maiden, Manilla Road Mercyful Fate and Bathory, Hundred are right up Iron Fist’s street. While they might still be in college, they’re clearly no slouches with regular gigs happening in Kingston and beyond. Guitarist David Pike gave us the details; “We formed in 2006 as Gravstead, just Adam, Patrick and Myself, with no real direction – we just wanted to get a band together to play metal!” explains David. “We had difficulty finding a committed drummer and vocalist. After a couple of years we had some luck, we hooked up with Eddy Knight through the Kingston Youth Service! He isn’t into metal, but he’s a great Drummer and he’s passionate about any projects he’s involved in.”
It was a triumph of the internet that gave Hundred their distinctive vocals. “An ad we’d placed on the Gumtree website yielded a response from Alex Storrsson, very talented and reliable; our line-up was now complete and we became Hundred! Having brought together all of the elements, our direction was clear. Fast-paced, riff-based heavy metal thunder!”
Demo material was soon put together, and the band’s sound started to form. “We began working on original material while playing a few gig’s performing covers. A demo was followed quickly by ‘The Riders Of Ardenland’ EP. We agreed that we’d find another drummer if Eddy wanted to move on, after four or five years that time came last Autumn and we found Tom Clinton to fill the space.” Looking ahead, things are looking very positive indeed for the band. They’re already confirmed for Up Hammers IX in Athens next March and say, “we’re now looking ahead to the Summer holidays for gigs, recording and possible festivals!”