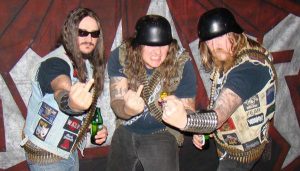 A change of scenery, maybe, but a change of heart, never. Even with the most subtle hints of added complexity (‘The Escalation’ utilising two guitars no less) the aural clusterfuck that is Vomitor remains the same. “For me death and black metal should be raw, nasty, horrible, out of control madness, there’s no need for it to be perfect and polished,” Rob explains of his modus operandi; a platonic form for the Vomitor ideologue, death metal is only real if it’s on the orthodox 1985 cassette. Correspondingly, Rob remains objective and immovable, giving a firm “NO” at the heretical, if not tongue-in-cheek question of warming to any modern influences. “Our intention was to play heavy as fuckin’ hell, to play stuff we just weren’t getting from the scene anymore,” he tellingly explains with an unsurprising dissatisfaction with modern metal adding that, “’The Escalation’ represents total fuckin’ metal – no compromise.”

‘The Escalation’ is a formidable volcanic eruption of metal thrashing death; pounding snare-battery, belching growls and wretched echoes, murky tremolo riffs and explosive leads all bubble and seethe together in a molten flow of terror and disgust. Throw in some song names like ‘Metal Or Die’ and ‘Hellburst To Fight’ and it’s as if death metal’s transition to the realm of fanciful pretence was nothing more than a whimsical notion dreamt up during an unwelcome spell of sobriety. Equally as orthodox are the lyrics, where Satan, Cthulhu and Lovecraftian nightmares all dominate the vocal affront. And whilst they’re stagnant matter for some in the progressive camp, Rob has nothing but appraisal for their necessity; “It is everything about heavy metal, I love it, so that’s what I write about. I’ve never been concerned about what others think, so as long as I’m happy, the rest of the world can fuck off!”

But surely Vomitor’s perceived low-brow appeal falls into conflict with such potentially high(er)-brow subject matter? An unapologetic Rob disagrees, reminding us of hedonism’s greatest equalisers, and indeed the core centrality of any demon, monster or nightmare. “Good friends, booze, drugs, metal and mayhem, this is all that matters in life. If that’s low-brow then call me The Frowner!”

Speaking of frowns there’s no doubt some pompous fools who don their own at Vomitor’s unholy approach to studio production. A notoriously haphazard affair, stretching efficiency to deficiency (of timewasting wankery), even Lemmy raging on amphetamines couldn’t wrap up studio time this fast. As Rob explains, such no-frills, to-the-point live recording is the inevitable cause of the trademark Vomitor sound. “I like the sound that way, everything bleeds into every microphone, the energy is not lost, and it’s cheaper.” That said, for those who are privy to Vomitor’s previous assaults, a beer or ten, or more, helps the medicine go down, ultimately aiding and abetting the “Death Metal Or Die” experience. Is this a deliberate, artistic intent, or, rather a natural effect resulting from the Vomitor ethos? Rob gives little away; “Everything sounds better after a few beers!” And purely out of curiosity, potentially serving as advice for any budding metal ov death devotees, just how many beers does it take to make a Vomitor record? “Beer is a constant, I never counted ‘em, it certainly would be boring to not drink in the studio!”

Despite joining the small-but-steady heavy metal diaspora trickling out of the Southern Hemisphere, ‘The Escalation’ was still recorded with somewhat rockstar-ish style back in his native Oz – a situation he finds no difficulty in accepting. “It doesn’t make much difference to the writing side of things as I write all the music,” he explains with laughter. “And for [‘The Escalation’] our budget was way more than the last two records put together so I had the luxury of flying to Australia for a couple months to put it together, always a good excuse for a holiday!” That said, the move to the Emerald Isle has proved overall beneficial, and despite the odd setback – Rob stating in previous interviews the band played more gigs prior the move – touring has become an easier cross to bear. “It is a pain in the ass, but it’s actually cheaper for us to tour. Even with just me being in Europe, flights from Australia to Europe and the US are a couple of grand per member. We just gotta have a couple days to rehearse before hitting the road and all is sweet. We’ve definitely been more active now in regards to full tours, rather than just the odd show. [Living in Europe] cut the flight costs down from around nine grand to maybe seven grand and that helps straight away, it’s the cost of a fuckin’ night liner for an entire tour before you even hit the road!”

They’ve been quick to capitalise on such opportunity, too. Last year’s modest US venture smashed its way through Northeastern cities from Philadelphia to Richmond to Brooklyn, and the ‘Satan’s Escalation Vomitour’ this July will leave a trail of radioactive puke across the UK, Ireland, Scandinavia and Germany. It’s a commendable effort by these purveyors of debauched death metal, providing an excuse for international maniacs to consume their own weight in beer. The only regret is the lack of debauchery on their own part for want of being stuck in the back of a van. “Travelling the world and meeting all kinds of strange new friends is the best! I wish we had more time in some of the cities to hang out and party more, but most times we gotta fuck off to airports or vans to get to the next show.” Recompense is found however, not least in the glorious, carnivalesque chaos that are Eurofests. “Playing festivals is great ‘cause we can get fucked up and party. Hammer Open Air in Finland a few years back was mental. New York was great last year, playing in Australia was always a blast and I’m looking forward to getting to Sweden finally this year, I love that place!”

Undeniably satiating the international underground’s hunger for raw death metal, Vomitor are, however, neither leaders followers but stubborn rogues who exist primarily for their own self-interests. “We’ve all been metalheads for three decades,” Rob says with a grin. “We play music for us and I listen to our albums all the time, so I guess we entertain ourselves. I’ve never found anyone smart enough for me to follow, so that ain’t gonna happen!” Rob concludes, with a sign of things to come; “The Satan’s Escalation Vomitour is coming up and we’re gonna hit the studio for a few days in Dublin to record some shit before we hit the road, we’ll see what happens there. See you fuckers on the road. Death Metal or DIEEEEEE!”