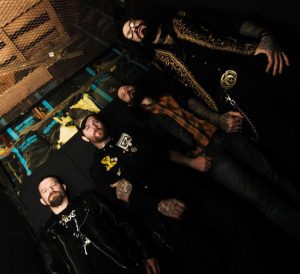 “It does not derive from the G.I. Joe character,” corrects Venomous Maximus guitarist/vocalist Gregg Higgins when asked about the band’s unique moniker. Oops…

“It comes from a tattoo that Jerry Collins (aka “Sailor Jerry”) created for Vietnam vets to get tattooed as a badge for those who are not afraid to dive into the unknown,” he explains. “It has nothing to do with venom. It has to do with the planet Venus. But just like everything else that’s a whole other story.”

He and his band mates: guitarist Christian Larson, bassist Trevi Biles and drummer Bongo have forged a self-described “dark heavy metal” style noted for its massive, sinuous riffs and Gregg’s unique vocals. If you are a fan of Age Of Taurus, Slough Feg or Hour Of 13 then it should not take much for you to dive into Venomous Maximus’ recently released debut full-length, ‘Beg Upon The Light’.

Venomous Maximus are but one of the growing list of artists, and there are sure to be more, contributing to the recent resurgence in traditional sounding heavy metal.

“Yes, I would defiantly put us as part of it,” he admits. “Now that we are past 2012 everything is a reassurance of the past. Not just music. It’s happening in hair styles, movies, vehicles, thought, etc. If the ‘60s was humanity waking up from a dream then post-2012 is remembering the dream.

“All we want to do is play rock ‘n’ roll on the dark side of the spectrum,” he adds. “It doesn’t mean evil. It’s just the opposite. People say we sound doom because that’s what they are looking for and you will always find what you seek.”