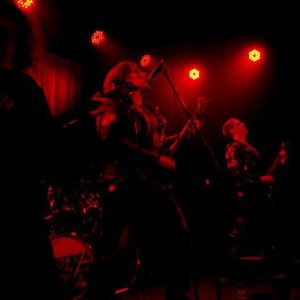 Frontman Wrath met Iron Fist in one of Camden Town’s finest boozers to talk through the long road towards the album’s release.
“Craven Idol is a brainchild of myself and Scourger, the two guitarists. We met at university and discovered very quickly that we had the same sort of interest in music. We wanted to play old school Sodom, German Poison, and were also big fans of old school heavy metal. The whole Australian black thrash movement was also coming out at the time and we wanted to incorporate all those things and not be too genre-conscious. I think we’re getting there now!
“The first demo tape was pure black thrash. A lot of people enjoyed it, but we only made 50 copies so thinking about it, I guess not that many people enjoyed it really,” laughs Wrath.

The tape in question was released in 2006, so to be sitting together in 2013 talking about the upcoming release of Craven Idol’s debut album makes the question of its long gestation unavoidable.
“We’ve been living apart quite a lot. I’ve been living in Germany, he lives in Witham,” explains Wrath. “We’ll write riffs and then come together and it becomes Craven Idol. It’s not a bedroom band as the songs only come together when we’re in the rehearsal room. We can go maybe half a year where we’re not in the Craven Idol mindset. I’ll go to visit him and we’ll play two hours of guitar and then go to the only pub in Witham. It’s very hard to force a process when you’re not using something else as a template.”
He continues; “You don’t want to just sound like old Swedish death metal or something like that. When there’s so many things coming from different directions, trying to mould that into ‘what is Craven Idol’ has taken a long time”.

The wait has most certainly been worth it, with an album that finds the line between aggression, atmosphere and melody and walks it expertly.
The strength of the material has seen the band sign up with arguably the best underground label around today, Dark Descent. Known for the high calibre of their releases, the label has become a hallmark of quality and one that can always be trusted when it comes to new bands. The signing has been a definite coup for Craven Idol, and Wrath explains how it came about;
“I met Matt from Dark Descent yesterday actually,” he laughs. “He said we were the very first band that they’ve signed based on a promo submission. I like to do it that way, sending labels promos but I guess it can be quite tedious for them. He said he normally only listens to 30 seconds of a promo, but with ‘Towards Eschaton’, he couldn’t stop listening to it.
“Dark Descent was definitely the sort of label I wanted it to be on, I mean I just listened to that Vorum album and in terms of the zeitgeist right now, they release that slightly darker take on the extreme metal scene”.

The title ‘Towards Eschaton’ seems extremely appropriate given the current geo-political climate. On the day this interview is conducted, America is about to push the detonate button on World War III by launching missile attacks on Syria and with the economy still in ruins, the Bullingdon club in Government and the price of a pint in the capital pushing the £4.20 mark, it seems an ironic case of serendipity that the album should arrive at this time.
“Not to steer into a political direction, but I think the album cover goes a long way towards describing the theme of Eschaton. As you can see in the cover, there are all these different monuments of different religious organisations scrambling into what is essentially hellfire, so I guess the lyrical themes are very aware. They don’t just scream ‘fuck religion’ and ‘hail Satan’,” explains Wrath.
“There is a time and place for that, but it’s not for us. It’s more about standing on your own two feet and rejecting that path towards Eschaton that is opened up by these kind of religious and delusional beliefs, if you will. Everything is depicted, from the Cross, to futile and hazardous dabbling with the occult, so it’s all inclusive.”

When it comes to being all-inclusive, the music follows suit, with a variety of influences from the entire metal spectrum on display. Not surprising, given the eclectic tastes of the bands, but it’s interesting to find a more philosophical reason for the album’s variety. In a world where every sub-genre is argued over extensively and the fanboy elite seem intent on pigeonholing to the Nth degree, it’s refreshing to find that Wrath takes a more holistic approach to extreme metal.
“When I first met up with Scourge, we had the same musical tastes. We tried to incorporate all of that, be it late or early ’80s. I spoke to Angel Of Death from Poison, who have been a massive influence and he was just saying back in the day, when they were writing, there was Hellhammer, Possessed and Sodom and all those guys just starting out. Putting tags on things wasn’t really relevant, I mean when Venom came out with their concept of black metal they just thought ‘that’s just for Venom’, that’s just what their music was called. Then he started getting tape trades or reading zines and people started calling themselves black metal!”

The approach is far more indicative of the current underground scene, which tends to fall more along the lines of ‘in or out’ rather than see fans and bands divide along genre lines, an analyse that Wrath agrees with; “They just called it extreme metal! I mean none of us are naive, but we are at least trying to be influenced across the board by ’80s stuff, say Manilla Road or Candlemass. As good as it sounds at the outset though; it also comes with a lot of worrying things. Even within extreme metal, there is a bubble of what is okay to listen to, once you step outside of that, whatever style it is, that band is ‘rubbish’ and that’s why I’m wondering how people will find the album, because it does step outside of that with the melodies and the aggression mixed in certain ways.”
Wrath need not worry. The album is fantastic and it is exactly the confluence of different genres and ideas that makes it so strong. With the label backing, the refined live show and the maturation of the Craven Idol sound, it’s looking like 2013 is going to be a very good year indeed for the British band.