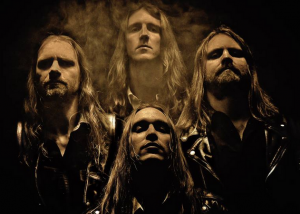 “Yeah, it was something like that,” confirms drummer and ringleader Estby. “After Dismember went on hiatus before breaking up for good, I did the Necronaut album with me playing most of the instruments and friends like Tompa from At The Gates or Dread from Tormented doing the vocals, but I think it was mostly an ego thing because by then I was fed up with the whole band idea. But I kept coming up with songs that, well, sounded like classic hard rock and didn’t have their place with Necronaut.

“I know that this is now what everybody’s doing but believe me, it just happened. I didn’t know what to do and opened myself up to both David and Tobias Cristiansson, who played bass in Dismember’s last line-up and appeared on the Necronaut album. Turned out they loved the idea and urged me to start rehearsing as a three-piece, just to see where it would lead us. And what can I say, things just instantly clicked. It was so much fun!” Even if getting Tyrant on second guitar (although he would eventually exit a year later) was a no-brainer, finding a proper frontman proved to be a much harder task. “There were a bunch of potential candidates but they were into following the footsteps of, say, Bruce Dickinson; you know that classic heavy metal banshee thing, whereas were looking for someone who had that blues side to him like Ian Gillan or David Coverdale. Plus in hard rock, these days, everything is so perfect and we’re definitely not in that state of mind. We like our music rough and in-your-face, like it was in the late-’70s.”

After few failed attempts, JB from Grand Magus agreed to help them out for the demos, “but this was just a temporary thing as Grand Magus takes up all of his time and we respect that.” At some point, the band were eager to try out The Quill’s former frontman, Magnus Ekwall, but he turned them down. It’s only when flipping through the pages of Close-Up magazine that triggered his interest in Sideburn. “I had heard the name before and Thomas Haake from Messhugah had already told me about their singer, so I decided to check them out and I was blown away by Jani [Kataja]’s voice. So I somehow got hold of him and offered him a beer and a job. He gladly accepted both!”

As an appetiser, the band have just released their debut single, featuring a cover of Quart’s ‘Mainline Riders’ and, on the flipside, a demo version of an original called ‘Dark Cloud’. Fred admits that the hardest was to re-learn how to use his instrument and “not wanting to play my drums as if I was Dave Lombardo circa 1986!” and that they’re planning on getting a second guitar player, although he refused to reveal that name yet. Nevertheless, they’ve been working since May on their forthcoming debut album at Estby’s own Gutterview studio: “It’s going to be a diverse album, we were nodding our heads to the sounds of Rainbow, Deep Purple or Thin Lizzy when we did this.” Dagger hopes to release it in early 2014 on a yet undetermined label. In the meantime, now managed by Leif Jensen from Dew-Scented, they played their debut gig on September 13 for a local cancer charity show in Stockholm.