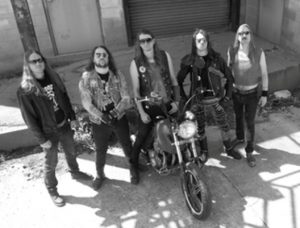 “We got drunk with Satan, man! It was pretty cool.”
You read Iron Fist, so the fact that Ryan Waste of trad metallers Volture is referring to the NWOBHM legends and not the dark overlord surely doesn’t make this story any less enticing.
“Wings Of Metal in Montreal, that’s the festival I just came from,” he elaborates. “Me and Nick [Poulos, guitars], we flew up there as fans just to go hang out, see Satan and Manilla Road and a bunch of my friends’ bands like Midnight and Goat Horn. It was amazing.”
Waste and Poulos are the partnership at the heart of Volture: a pretty amazing band with a pretty amazing story. That story kinda begins a long time ago, when Waste was in his early 20s, had just started out with Municipal Waste (they hadn’t blown up yet) and decided to try to fulfil a lifelong dream: playing in a traditional heavy metal band.
“It’s something I’ve always wanted to do, but you know, I hadn’t found the guy with the ‘voice’. Brent had that amazing, falsetto voice. I was like: man, you need a band! I didn’t even know the guy, I just heard him sing. I was like: we need to build a band around this, this is too good to not be out there!”

You can hear in an instant why Brent “Metal” Hubbard prompted such a reaction in Waste – and why when his band, Immortal Avenger, “took a wrong turn and fell apart” he kept the singer in mind. Four years ago, it was Waste’s friendship with Poulos which led him to try again. Poulos was then still the guitarist of Cannabis Corpse, another Municipal Waste “side-band”, but he had become quite taken with all the obscure heavy metal Waste had, in true ’80s style, taped for him. Picking out a lot of the songs immediately on the guitar, Poulos prompted Waste, after a night of drunk we-shoulds, to call up former Immortal Avenger drummer Barry Cover and get Brent “Metal” Hubbard back behind a mic. Playing bass? The sinister Waste.

“I was originally a bass player. I’d never played guitar before ‘Waste: I grew up playing bass,” he says. “Being left-handed and just not being able to get cool guitars and everything, I could find a bass a lot easier. I’ve played bass since I was 13 and I always wanted to do the absolute heavy metal band, with like sailing leads and stuff – and I always wanted to find better guitar players than myself to play with, you know? People that could do a lot more. And I felt like I could do a lot more on bass. So this has been a never-ending search to do this kinda band and Volture’s finally the one that stuck. Immortal Avenger didn’t work.”
Volture had already recruited a second guitarist, David Boyd of Twisted Tower Dire, by the time their debut mini-album, 2010’s ‘Shocking Its Prey’, was released.
“People think there’s this huge metal scene where we live in Virginia,” Ryan explains, chuckling involuntarily. “There’s really not a scene for this type of heavy metal: there’s a few people that understand doing the real, traditional heavy metal. David has been around Richmond – he’s like an older guy – and Immortal Avenger and Twisted Tower Dire used to play shows together. So it was a no-brainer, like: here’s another heavy metal guy in town, let’s see if he’ll learn the songs and make it a dual guitar attack, which we always wanted.”

The 2011 single, ‘Rulebreaker’, proved just what a powerhouse Volture had now become – and though ‘Shocking Its Prey’ was impressive, it would be easy to believe that it was this 7”, with its incredible b-side a cover of ‘Killer Angels’ by Gotham City, alone scored Volture a slot at 2012’s Keep It True festival.
“We got asked, man: that was amazing,” says Ryan, still sounding almost in shock at getting to play the fan-centred event whose running order has scheduled signing sessions for every artist listed next to their stagetimes. “That was still to date my favourite show I’ve ever played. It was incredible.”
Meeting all those guys who inspired you, like Dennis Stratton…
“Yeah, it was pretty incredible. I mean Dennis Stratton and all those guys, it’s cool that they are really grounded simply because they never saw that huge stardom like that they could have. I mean you see where Iron Maiden went to and you know, bands like Trespass that I met: those guys couldn’t believe that I knew their songs, you know? They were just real humble and I think it’s just cool. It’s almost like that rockstar mentality is pretty gone with heavy metal. Everyone seems pretty grounded and it’s a cool contrast to what, you know, the ’80s were.”

“We knew we were out of a singer long before I made it public. Like we got back from Europe last year [Volture framed a tour around the Keep It True appearance] and Brent, who is still a good friend, was giving all the signs that he just did not want to be in a band.”
Yes, that’s right, Mr Metal himself has been replaced – and by one Jack Bauer (he didn’t materialise out of ‘24′ though, we checked: it is his birth name but he is not a fiction). ‘On the Edge’, Volture’s latest album, is Bauer’s debut and it is a monster: a 40-minute maelstrom of traditional metal crafted into two parts, made to be played on vinyl. And Hubbard hasn’t left without saying goodbye, either.
“It came about after the European tour,” says Ryan of how Hubbard came to do backing vocals on no less than five tracks on ‘On the Edge’. “I had asked him and I had talked to the remaining guys in the band, like: what if we get Brent on some of these songs? It was a passing of the torch, it really was. I think Brent, y’know he could probably be in a studio band. I think he really enjoys the studio, but he just is not cut out for the rock ‘n’ roll lifestyle. He’s not cut out to be on the road, with sleep patterns changing. He doesn’t drink, he’s a really health-conscious guy, he likes to work out and I mean, that’s about the opposite of what you’re going to get on tour. I tour for a living – some people can do it – but on a more DIY heavy metal level, you’re not gonna get to a hotel with a gym and be able to work out. I’m sure some people get to that level, but we’re basically punk rock touring playing heavy metal: setting up shows in basements and DIY venues. The comforts aren’t going to be there.” 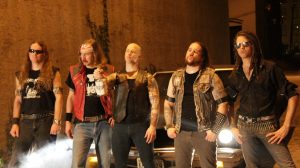 Though he arrived to a mostly finished album, Bauer was instrumental in making ‘…Edge’ as stunning as it is – and not just through the voice he lent it.
“Jack came in and all the music was more or less written, instrumentally, and one song, ‘Rock You Hard’ [‘…Edge”s penultimate pound], that was a song Brent had written before, like a long time ago. That was the only lyric that we had for the new record, basically. So I got with Jack and it was kinda like a Rocky training camp. I threw him in the mix and was like, ‘Alright! I’m gonna write lyrics with you! We’re gonna bang out these songs!’ And I sat with him and we came up with the majority of the songs; ‘Brethren Of The Coast’ he did on his own, and I think that turned out to be one of the better songs, lyrically.”

Ending side A, ‘Brethren…’ is definitely a standout, switching pace from the blazing speed and violence of the album’s opening triptych, which tie into its cover, it recalls Manilla Road’s ‘Queen Of The Black Coast’ but is distinctly more epic, a perfect first closer.
“That’s an old song that me and Nick had written that had just been changed and added to over the years,” explains Ryan. “It had been like three different titles with Brent singing and it finally became a water-themed song, which I think really fits. It’s got like a yo-ho-ho kinda intro; Jack happened to be really into that, you know, piratey-type thing, that kinda mythology, so he really came through on that one.”

More than doubling their canon to date, ‘On the Edge’ is far more comprehensive and intense than its predecessors: like so many great HM records from the ’80s, it is a powerful enough package to create its own little world.
“I’m deep into the art,” says Ryan. “I always work real closely with the artists and I actually buy the paintings that they do. So that cover, that’s an actual painting and it’s hanging in my living room right now. We were summoning old ’70s biker exploitation movies. Jack rides a motorcycle and I think it was a good entrance of introducing the new guy, and the lyrics to those first three tracks do tie into the art. It suits the music, that’s what’s really important.”
Currently playing shows in the US with Diamond Head and Raven, Volture will return to Europe in March 2014 as support to Cauldron and are trying to get themselves onto February’s Brofest. We’ll keep our fists crossed.