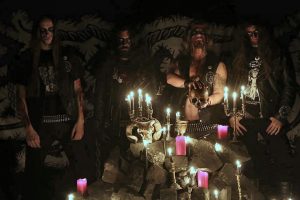 Performing a hybrid of thrash, black and death with shrieking vocals that betrays none of its Belgium roots, Possession are adamant about how “spontaneous” the whole thing has been from day one. “We recorded our demo live in the studio because we didn’t feel like spending hours overdubbing minor sound issues and mistakes,” specifies Mestema. “Instead of that, we thought that the bestiality and the energy of our music were far more important things to capture. We think this example clearly shows the way we see our band: we try to work seriously but we refuse to let some details turn into some exhausting pain in the ass. We wouldn’t call ourselves thrash or even black thrash but still we can understand why some people tend to label us as thrash. At the end of the day we don’t care. And if the result is too cliché, dated or whatever to you, it’s maybe because you forgot what metal really is!”

Rounded up by a killer and suitable cover of the early Sepultura classic ‘Necromancer’ (“It was our way to express our deference towards the South-American pioneers such as Sarcofago, Vulcano, Sepultura, Mutilator, Pentagram, Korzus etc”), their demo was saluted by their first ever live performance on November 16 in Brussels. And 2014 looks quite busy already: “We will play our second show ever on April 12, 2014 and to celebrate, we’ll release our first 7”. It’s already recorded and we’re just waiting for the cover artwork. Besides that, we are working on new tracks that we hope will be released as a MLP in late 2014 or early 2015. This will be some kind of a conceptual release so that we are putting a lot of effort in the composition and the writing of the lyrics.”