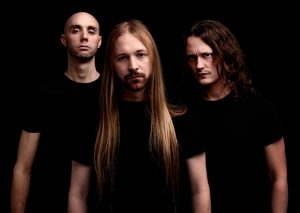 Taking their name from the title of a poem found amongst the ungodly works of H.P. Lovecraft, Astrophobos’ lyrics, at times, read as though they were summoned forth from the same yawning abyss as that of the much cited author. So what is it about Lovecraft’s writing that inspires the band? “Well, we’re not very interested in having Satanic lyrics, and horror fiction has themes that go well with the music,” Micke explains. “Lovecraft’s stories deal with things like fear, the end of the world, and madness, with a kind of gloomy and poetic streak in the style of writing, which also goes well with black metal, I think. But if you see his style of writing in the lyrics, it’s not completely conscious, and I have many other stylistic inspirations.” There you have it: Astrophobos, a Swedish band sourced from a sacrosanct well of inspiration, yet fiercely driven to carve their own distinctive mark into the time-ravaged face of black metal.