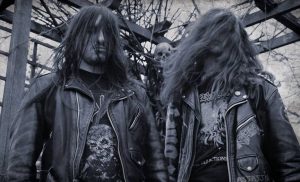 Before Skelethal, there was Infinite Translation a classic sounding thrash band from the north of France whom guitarist Gui Haunting joined in late 2009, right before the recording of ‘Masked Reality’, their second full-length. “I had seen the band live few times but didn’t know them personally before I joined,” he recalls. “Their bass player Jon and I really hit it off although I’ve always been into a more extreme style of metal, whereas he was first and foremost a thrash fan.” Being a former drummer, Jon used Infinite Translation’s rehearsal place to relearn his way around the instrument and in 2012, the two hatched an evil plan to play death metal, the ancient way. “We love playing in both bands but we went to keep things separate: like Infinite Translation was meant play thrash, Skelethal’s raison de vivre is to perform real death metal. We love the atmosphere and vibe from the early scene and even if I’m not old enough to have had the chance to live that period, I think there was a honesty and a dedication then that sadly got lost at some point. Nowadays, there are way too many bands and everything is just a click away. This being said, we didn’t overthink it, we just played what we felt was right.” The then duo (they’ve recently found two session guitarists in order to start playing live) settled very quickly on the name Skelethal, saying, “We wanted a one-worder and I picked up ‘skeletal’ while reading some lyrics. We added a H to have a pun word with ‘lethal’ and that was it.”

Determined to follow the good old DIY ethic, after a first demo (released on tape format, of course) in late 2012 called ‘Morbid Devotion’, they’ve just unleashed their first MLP ‘Deathmanicvs Revelation’, a crude recording produced, performed, engineered and designed entirely by its two creators: “We were at first considering putting out just a 7” but we soon had too many songs to choose from so we went for a MLP instead. We recorded everything in a rehearsal room by ourselves and we plan on keep on doing that!”