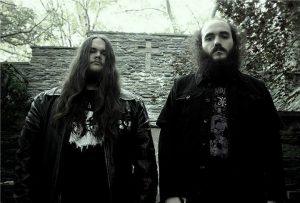 “When I was in high school, two years before I started Pilgrim, I fucking hated metal. Me and Krolg thought that metal was the stupidest thing. It’s a bunch of chauvinistic men, muscled out dudes, playing this stupid brutal music,” recalls The Wizard, laughing. He spends over an hour on the phone with Iron Fist being noticeably excited about everything discussed. This ranged from Weird Tales alumni Robert E. Howard, the Sanskrit epic of India known as The Mahābhārata, Dungeons & Dragons, Saint Vitus (Reagers era, not Wino), filmmakers David Lynch and David Cronenberg, obscure 1976 horror film ‘To The Devil A Daughter’… the list goes on.
“That’s what we identified with, because we were sheltered. We played video games, read books, and didn’t listen to music. Well, I did, but it was Smash Mouth and I had my ‘N Sync and Eiffel 65,” he laughs, unapologetic. “When we first started playing music… We were really big grunge fans. Not pop grunge like Pearl Jam, but the Seattle stuff, like Tad, Nirvana and Mudhoney. So we were really into short, dirty, raunchy songs. So, that’s where we started musically. Then we started listening to Melvins, and they got slower and heavier, and then Acid King, and slowed it down more, and then Electric Wizard, and it kept slowing down. But we never lost that great appreciation for the Seattle thing. So, I think when we started doing doom, we wanted to do Nirvana and Reverend Bizarre at the same time, or something like that, you know? So heavy music, good melodies, memorable, catchy stuff. But doom metal. And also, have it be about dragons, warriors, and wizards.”

Many competent and experienced bands before them have tread this territory, and if any complaint could be levelled against their full-length debut, it’s a lack of innovation on a familiar theme explored by Reverend Bizarre, Wandering Midget and earlier era Cathedral. Certainly, ‘Misery Wizard’ demonstrated capability, but there were improvements to be made, simply because the songs often lacked variation. At 55 minutes, it’s a bit exhausting, which is unfortunate considering those that worked did so excellently (such as album highlight ‘Quest’) because they played with contrast and tempo. The Wizard and company have absorbed such complaint and acted upon them on ‘II: Void Worship’. The album spans eight tracks, and was captured in Jersey City by Moonlight Mile Recording engineer Mike Moebius.
“I think, compared to the first record, the songs are all, tempo-wise, a little faster,” The Wizard admits. “And even if they aren’t faster, they will come off as more interesting and less boring than the first record.”

After just one listen, this becomes abundantly obvious. Rather than trudging along with repetitive riffs laden by feedback, ‘II…’ kicks it up a notch and incorporates groove and structure. The run time of most tracks has been chopped considerably, and incorporate quiet/loud dynamics and rocking climaxes. To top it off, the vocals are better placed in the mix. The change reminds us of the audible shift in speed in Cathedral’s output between 1991 and 1995.
“I would say it’s more like ‘Forest Of Equilibrium’. Savage. Less diminished chord patterns, just pentatonic minor classic heaviness,” the frontman agrees. “You have your classic, big, epic doom sounding tracks, and then you have one faster track that’s really upbeat and sounds like a knight on horseback charging into battle. And then you have an atmospheric track, where it’s mystic, swirling, foggy.” He continues; “The first record, when we wrote it, I was really into this concept of having a huge, heavy riff, that was so heavy, and mesmerising, and catchy that it lulls you into this hypnosis, and you get carried away with it. You get stoned and listen to it… Our new record is different in the sense that, for me personally, I felt that [older] style was a little boring, and I found that what I really liked more in music was really good songs. A kick-out-the-jams song with catchy melodies and awesome, memorable lyrics.”

Lyrically, The Wizard have shifted away from an emphasis on the occult, instead focusing almost exclusively on what they love and know best: “Fantasy, mysticism, swords and sorcery.”
“That’s our vibe, that’s what we like, but the thing about our band, although we use all that shit, all the songs are actually about things. Life and situations,” he explains. “If you put it through a layer of fantasy, it just comes across more organically. I like the aesthetic of fantasy, so use it as prose to move a storyline and convey emotion. I find that really easy and I like doing it.”

As for the artwork, unlike the first album cover, which is a combination of Cathedral’s aesthetic as perfected by Dave Patchett and Reverend Bizarre’s surrealistic old time imagery, ‘II: Void Worship’ turns in the direction of Cirith Ungol and Saint Vitus. Depicting a wizard mid-spell in a cavern moments from being slayed by a sword-toting warrior, it’s a hazy, colourful image that brings to mind Ken Kelly and Frank Frazetta.
“We lucked out and got this guy Adam Burke to do it,” recalls The Wizard. Burke is in Portland based band Fellwoods, and his artwork also graces the cover of the debut by psychedelic rock Boston-based rock act Ice Dragon, dubbed ‘Dream Dragon’. Pilgrim’s current bassist Bradoc is also in that band. “We are all in agreement that ‘Dream Dragon’ is one of the most beautiful album covers we’ve ever seen. It’s this amazingly painted, a dragon with a catfish face, flying right at you.”
Immediately, the image of Saint Vitus’ ‘Mournful Cries’ comes to mind. This association makes the Wizard chuckle; it is evidently right on target. “It’s funny you mention it, because we designed the back of the record to look identical, it has the exact same layout and the exact same font and all the track listing is laid out in the exact same way.”
Although they clearly haven’t quite moved away from the full on genre worship that often plagues doom metal, Pilgrim is certainly maturing both sonically and visually. ‘II: Void Worship’ is excellent. With it, Pilgrim begins their shift from emulator to innovator status.