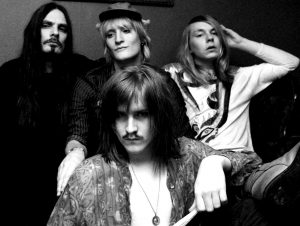 Tell us about the reason why you have called yourself The Tower.
August (guitar): “The Tower has a very dramatic symbolism, as the tower of Babel, the tower in the Tarot. As such it describes a process that is at the heart of our band and also of rock music in general; the alternation between tension and release in the music, the hubris of a rock star rising to the top, and the soteriological catharsis of collapse and rebirth inherent in every good crescendo. Apart from that the Tower is also a place. The archetypal rehearsal room outside of space and time, where the spirits and Bacchants convene, the ivory tower of the plectrum-wielding disciples of Apollo, and the fortress that gives me shelter.”
Erik (vocals): “We all are in some ways very different from each other, you can say that we’re standing in our own corners. But together we become a circle, the corners are unified in the larger building that is The Tower.”

The opening track on the album is called ‘Non Omnis Moriar’, meaning ‘not all of me shall die’. What does this phrase mean to you?
August: “The title is a promise to the protagonist about to embark on a journey through the album. The album will come to an end and the tower will crumble, but not all of the listener, nor of the album, will die when it does.”
Erik: “Some things must die to give place for new to grow, but some things are eternal and will survive a journey to Mars or a journey into your own libido.”

Tell us about more lyrical themes that run through the album.
August: “I’m not a fan of explaining lyrics, so I will politely decline to do that. I will say however that most of the lyrics are multi-layered. On one level they are brilliantly daft lyrics about epic sex, fantastic drugs and freedom-fighting rock ‘n’ roll – the way you expect good rock lyrics to be – while on other levels they can sport funny pop cultural references or be allegorical, mystical and spiritual.”

The album has a distinctive ‘live’ feel to it – to what extent would you agree?
August: “It doesn’t just feel like live, it is live! Or at least the foundation of every track is live. We recorded drums, guitar and bass live, and in many cases also a vocal track (that was later overdubbed), and then vocal lines and any additional guitars on top of that.”
Erik: “Some of the lyrics were captured in the moment they were sung. The later part of ‘The Tower’ (the song), were just improvised for example.”

In terms of newer bands, perhaps The Tower’s reference would be a band such as Witchcraft – to what extent would you agree?
Tommie (drums): “I can see why someone would make that reference. Sound-wise, I think they also followed the tradition of a natural and pure production far from the computerised bullshit, and they definitely helped pave the way for our kind of music.”

Tommie, your pedigree is steeped in the more extreme side of metal (Nocturnal Rites, Therion, Saturnalia Temple and ultra-cult early-1990s Swedish death metallers Ligament) – tell us about why you have moved into a more classic vein of rock music.
Tommie: “I grew up with classic hard rock, and just followed it as it got harder, finally ending up co-founding a death metal band [Nocturnal Rites] in ’89. But a couple years after that, I found myself digging up my old hard rock vinyl again and exploring further back in time, following a spiritual and musical thread that I consider to be the key to all great music.
“The spirit and soul is what is most important in bands. If the energy and depth is there, the music will be great no matter what. I mean, I can hear, or perhaps more feel, similarities between Autopsy and the Allman Brothers band, two of my absolute favourite bands ever. Great musicians both, and they both have that spirit and soul. I can also understand that superficially, you perhaps can’t find two more different bands.”

How did the experience compare with your previous recording experiences?
Tommie: “It was different, since in the ‘90s I got to work in bigger studios with real producers which can be both great and horrible – [like] with Therion. After that I have created my own little studio out here in the wilderness outside Uppsala where I live. So all Saturnalia Temple recordings for example, I do everything just the way I like it, mixing and mastering et cetera.
“The Tower album was kind of like a mix of those, we recorded in the great Studio Underjord that has this great old Amek mixing desk and amazing huge live rooms, so it was definitely different from working in my own little loft. But then we were almost producing the album ourselves, with wise help from Joona Hassinen, so we still had lots of control over the final result.”

The album ends with the epic 11-plus minute song of the same name – what’s the story behind that track?
August: “It started out as a very loosely structured jam. The guitar and bass would just keep churning an open drop D chord, backed up by some theatrical but doomy drums, the instruments functioning together like a shaman’s drum, and Erik would get the vibe and deliver some kind of spoken word sermon. The song gradually coalesced into something similar to what you can hear on the album, but it still relies heavily on improvisation and never sounds exactly the same twice.”

What are you hoping to achieve with The Tower – musically, lyrically and aesthetically?
August: “What we’ve done so far, only more of it. Extra everything. The song will remain the same but we will deliver an even more sharply focused multi-pronged attack.”

In what ways do you have an association with the lion?
August: “Isn’t it obvious: we’re the Lion Of The North!”