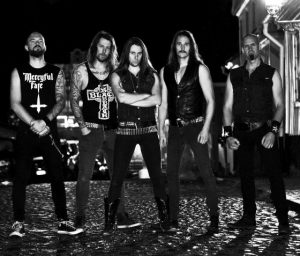 One suspects that Below, Nykoping, Sweden’s relatively fresh-faced troupe, understand all this only too well. Arriving in the wake of an EP that gained them considerable plaudits for their refreshingly epic take on doom-laden classicism, their debut proper, ‘Across The Dark River’ on Metal Blade, walks a tightrope of sorts, maintaining a contemporary heft and formidable heaviosity whilst very plainly taking almost of all of its cues from a stubbornly limited selection of influences. Far from shying away from comparison, Below have never made any bones about the fact that their three touchstones are Candlemass’ ‘Nightfall’, King Diamond’s ‘Conspiracy’ and Black Sabbath’s ‘Headless Cross’. Yet more importantly perhaps, the selfsame never-say-die spirit, that which made Cloven Hoof play pubs in Stroud as if they were a Long Beach Arena and encouraged Tony Iommi to continue with the Sabbath legacy even when there were more original members of the Sabs in Ozzy’s solo band, is very much present and correct.

“I think the goal we had was to record a really, really heavy, heavy album, but without losing all the melodies,” reflects guitarist Micke. “All of the bands that are playing doom today were really lacking the melodic side of it. There’s just so much riffing and riffing. But that’s kind of what we focussed on, to bring back the very operatic vocals.”

Candlemass are very much the strongest influence here, not only due to the aforementioned lung-power of powerful frontman Zeb, but a mighty grasp on the lead-heavy elegance and lumbering nobility that led to this unglamorous troupe becoming both a divisive proposition in the ’80s and cult catnip for the ages. “’Nightfall’ is Top Three albums of all time, to me” ventures Micke. “The songs are very dynamic. I think it seems like they have put a lot more work into the songs on that album, especially the guitar work, the melody lines, everything is a lot more worked through.”

More surprising perhaps is the band’s love for a period in Black Sabbath’s history most commonly looked on as something of a nadir. For many, with enormous boots to fill, Tony ‘The Cat’ Martin was an insubstantial choice of frontman when Sabbath were traversing through the dark days of the late ’80s, possessing a formidable set of pipes and a tastefully overwrought set of stylings, yet zero stage presence. Talk to Micke, however, and he’ll act almost incredulous that the chap with the Dio-esque bellow and the receding hairline could be perceived as such.

“For me, he’s definitely the best Sabbath singer,” he states with complete confidence. “I mean, technically maybe Dio is better. But ‘The Headless Cross’, the hooks and everything, I love that album. There’s a real feeling to his voice.”

Perhaps the least audible of the unholy trinity that comprises Below’s self-styled sound is that of ‘Conspiracy’ by King Diamond. An album to many ears dominated by Ozzy-esque axework and a slightly commercially compromised take on the King’s boo-hiss shtick. Yet for Micke, it’s expressly more of an overbearing vibe that forms the inspiration. “There’s definitely more King Diamond than Mercyful Fate in Below. I mean, I love Mercyful Fate as well. There’s more metal in King Diamond. That’s one of the key points for us to keep everything metal. The lyrics and stuff that we write are very horror-ish. And also many harmonies on the guitar are very King Diamond in inspiration, so I think that’s mainly the vibe thing coming from those harmonies.”

Nonetheless, a considerable coup came into play when Below found themselves being produced by none other Andy Laroque, the axeman whose riff and shred expertise gave ‘Conspiracy’, and indeed most of King Diamond’s solo work, so much of their visceral appeal. Bizarrely, all Below had to do, it seems, was ask. “We were actually, from the beginning, booked in a studio here, in our home town, but that didn’t work out, so in all the stress we just e-mailed Andy Laroque and luckily he was free. He definitely helped us shape the sound. He really had a clear vision when we got there of what we should sound like, and of course because it was Andy Laroque we were really performing our best. He was a really down-to-earth guy so there wasn’t actually a lot of pressure. It was very comfortable.”

Moreover, after hearing Below’s EPs, the King’s right-hand-man was more than happy to lend a hand. “Yeah, I was really happy when Micke made contact with me and I heard their first recording,” Laroque enthuses. “I thought wow, this is great! 1980s doom style with great musicians and a great singer, and style-wise I’d love to work with a band like that. Very refreshing compared to other styles I’ve been working with lately.”

All told though, for all the small-g gothic stylings and theatrics that Below had employed to create this thoroughly diverting sound, perhaps the most important factor is something that’s still almost a taboo in metal circles.

“We were trying to be… it’s sad to say beautiful!” laughs Micke. “But that’s kind of it.”