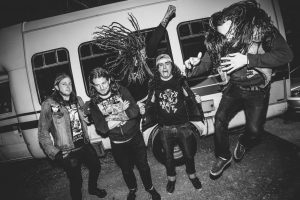 As skin-thumping timekeeper Jonah Livingston elaborates, the push from a party thrash band releasing a 7” followed by touring to the contemporary beast we witness today was the laboured result of a forced pragmatism. “The biggest catalyst for us as a recorded band was losing a couple of band members two or three years ago,” he explains. “We used to jump at any chance to tour, like, ‘some dude wants us to play a fest in the middle of the woods in Texas? Let’s book a full US tour around it!’ When we lost our old guitarist and bassist it forced us to stay home and use our time to work on fleshing out ideas in the practice space. That really helped us take the songwriting and recording process more seriously and now that the record is in our hands we can go back to what we’ve always been good at… hitting the fuckin’ road!

“I think our songs have progressed fairly naturally over the years, if you listen to all the releases,” Jonah continues, “but if you’ve only heard the first LP and jump straight to the new one your mind is going to be blown.”

Undeniably so. The effortless marriage of an entire genre-spanning spectrum into one holistic rager evidently takes time to refine – as much as it is the beer-fuelled symbiosis of unified and eclectic tastes. “We all more or less listen to the same music, but we go through different phases. Kallen [Bliss, guitars] went a year or two only really listening to D-beat and Pete [Gallagher, vocals] used to lean towards death/thrash type riffs, but then recently started listening to a lot more rock ‘n’ roll,” he explains of their progression. “There are very rarely conversations about where we want the band to head, we just crack open some beers and see what everyone has been working on. There’s never one songwriter, and everyone is allowed to work on each others’ music, so it very naturally ends up being a mish-mash of rad shit.” Not forgetting, of course, those soaring catchy hooks throughout ‘Destined to Die…’, inevitably drawing the loosest of comparisons with the crushing and metallic melodies of a few select Swedes; “We all love Iron Maiden and Thin Lizzy so it seemed obvious to start throwing all those big guitar harmonies into the grind and D-beat parts. It’s probably the same thing that Disfear, At The Gates, Wolfbrigade and all those Swedish bands were thinking!”

As Jonah stated, Ramming Speed’s natural habitat is the open road and sweat-drenched venue. It’s a hard slog of an existence, but, when channelled correctly, the chaos and frenetic energy can be harnessed and manipulated with astounding results. In such instances the studio becomes mandatory and touring and rehearsing are a continual cycle of the ends perfecting the means – a process that keeps Ramming Speed firmly connected to their party thrash roots.

“I personally hate the studio,” admits Jonah. “I find it wildly stressful, but working with Kurt Ballou [producer] on this new record was easily the best recording experience we’ve ever had. In general I much prefer to be out on the road, but buckling down at Godcity Studios for a week and a half with my best buds led to a record that we are all phenomenally proud of. I wouldn’t trade that recording experience and the end result of it for anything.” And as for rehearsing new material, testing the water and tightening a few bolts, what better place than on the front line?

“Whenever possible it’s always awesome to road-test new music. Riffs will change shape when you have a crowd going ape shit, when you’re sweating and the tempos start to speed up, and after you’ve been pounding at them every night for two months. On our current tour we’re playing one brand new ripper that we just tightened up in time for this run, but we have about six written for the record that we’ll put out next year. I’m sure we’ll bust all of those out here and there before we’re back knocking on Kurt Ballou’s door.”

However, whilst on the front line of underground metal and punk hurtling across endless miles of autobahns and interstate highways, traversing state and national borders to grace both dive bar and festival stage, what are these seasoned road dog’s secrets to tour survival? “Negativity can eat a hole in your band so if you try and stay positive through all the bullshit you’ll do fine. Obviously drinking and eating crappy food and staying up all night doesn’t really help your mental state, but it’s all part of the ride. Laugh in the face of sore bones, van problems, plastic food and low turnouts. If you learn to have fun when everything sucks, you’ll appreciate it all the more when your hard work starts to pay off.

“At this point we could write a book on all the good, bad and strange times,” he continues, offering a spot of anecdotal evidence of the ups and downs, and most importantly, the enviable rewards – and mischief – from years of musical toil. “We’ve done European tours without a driver where we had to book half the shows at the last minute and got lost every day driving through countries with incomprehensibly foreign maps. We’ve been pulled over and had our luggage torn apart by plainclothes cops in Bavaria, had all our money stolen in Italy, been arrested at gunpoint in California, and dealt with the stresses of van breakdowns, canceled shows, hunger and poverty. But on the flip side we’ve done shit that no one gets to do – Ramming Speed has probably played more shows in Iceland than Manhattan. I watched Danny Herrera from Napalm Death give a quick blastbeat lesson backstage at Obscene Extreme in Czech Republic. I’ve wandered around the snowy streets of Berlin speeding out of my head with Saviours, and peed into a giant Christmas tree in Reno after a hallucinogen-fuelled hotel party. Just last night we chilled in a jacuzzi with Valient Thorr and Artillery Breath ’til 5am watching shooting stars, telling tour stories and drinking cold beers. It’s all an adventure and you take the good with the bad. Born to lose, live to win.”

International tomfoolery notwithstanding, it is curious to note whether or not Ramming Speed’s genre-smelting trickery has ever roused a po-faced disapproval or puzzled stare in Europe; a continent whose punk and metal scenes are notably divided compared to it’s North American counterpart. Jonah’s experience suggests quite the opposite; “I’ve heard other bands complain that in Europe the scenes are super divided, but we’ve had awesome experiences over there. Our first couple of European tours were totally DIY, no label support or fancy booking agents or anything, just some friends helping us get shows at punk squats and community centres. We obviously ended up playing a ton of punk and hardcore shows and those are still some of the craziest we’ve ever played.

“One of my absolute all-time favourites was Fluff Fest in Czech Republic,” he recalls with an air of nostalgia. “It’s traditionally a straightedge hardcore fest, but we had a thousand kids circle-pitting and stage-diving in the middle of a field at 4pm. In America scenes tend to be a bit more insulated, I don’t know if they’d ever let us on a big hardcore fest here, but in Europe we get to do shit like that and play random one-off shows with bands as differing as Inepsy and Misery Index.”

Eight years continually at the grind has blatantly been key to Ramming Speed’s success, whose concrete reputation is near-exclusively based on their industrious work ethic and, most significantly, their outstanding skill not just as a crossover band but as musicians. The idiom rings true, you reap what you sow; often with inconceivable benefits, their recent inclusion within the Prosthetic roster is testament to this very fact. Jonah wraps things up with sobering dose of the reality that in spite of crafting easily one of the utmost vital and refreshing contemporary thrash records with the potential to wrangle the very predicate of crossover, Ramming Speed are still just a troupe of metalpunks on a quest for fun. “I never ever thought our band would have a full-time staff in an office on the other side of the country working to get our riffs out there. It almost feels like we snuck in somehow, it’s like, ‘Have they even heard us? When are they going to find out we’re just a bunch of smelly friends driving around blasting Judas Priest tapes and searching for the best margaritas?’”

On the off chance Prosthetic don’t catch a whiff, Ramming Speed will be back speeding across the States in the autumn with an eye for European soil come early winter. “People should always feel free to get in touch if they want to help with gigs, put us up for a night or share strange stories from the road,” requests Jonah. Take heed, lend a hand and experience a piece of action.