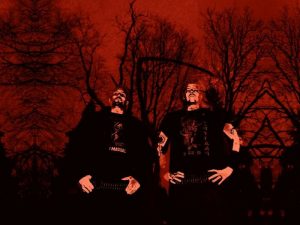 “When you look at death from death’s perspective, you realise the pettiness of humanity. death cares not for your grievances or troubles, it comes to take you when you least expect. It is the power that supersedes our human creations: religion, politics, philosophy,” offers Todd Burdette, he of Tragedy/His Hero Is Gone fame and now one half of Nighfell, the band he formed two years ago with Tim Call (Aldebaran, The Howling Wind). The power of death casts a grim shadow over Nightfell’s stunning debut for Southern Lord, ‘The Living Ever Mourn’. “Envisioned and executed in a period of grief, delirium, and loss of life,” according to Burdette the creation of ‘The Living Ever Mourn’ was a cathartic experience, telling us “Catharsis is the primary force, death is close behind. We lament the lost, but we still breathe.”
This defiant statement defines their debut album in its entirety, as even though death is laid bare in all its stark reality, there is hope and strength to be taken from ‘The Living Ever Mourn’. In terms of sound, it is an open-ended album, one which spans doom, death and black metal – but not exclusively so, as there’s plenty of punk aggression, mournful melodies, and gothic atmospherics in co-existence. As a notable stylistic shift from Southern Lord’s recent fondness for crusty hardcore – ironically bands raiding Tragedy’s discography – Nightfell’s signing to the reputable label was actually straight forward in the end. “We have both known Greg (Anderson) for a long time and he was genuinely into what we were doing and very enthusiastic about getting this album out,” explains Call. “Also, the quality and aesthetic of Southern Lord releases [are] something we both appreciate.” And if we are to believe Burdette, songs the stature of centrepiece ‘Empty Prayers’ are just the beginning for Nightfell: “The second LP is already in the works. A live line-up will materialise if the stars align.”