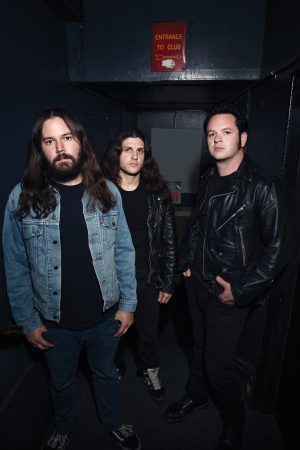 “I may lose a lot of underground cred and some hipster points here, but I believe in being completely honest.”
Jarvis Leatherby isn’t kidding about honesty. Corresponding with us by email from the three-piece’s 60-date headlining tour of the US, Night Demon‘s bassist and vocalist is big enough to admit that they played to 20 people in New Orleans. But fuck credibility: we’re just plain surprised they didn’t take their name from the classic cut ‘Night Of The Demon’.

Turns out that Night Demon just wanted a name that was also a song: ‘Night Demon’, featured on their much-touted debut EP, was the first song they wrote.
“We were surprised that nobody had taken the name. It’s difficult to find cool band names that are out there for the taking, so we just ran with it.”
Formed in 2011 in Southern California, the band’s debut full-length has just dropped – and ‘Curse Of The Damned’, released by SPV/Steamhammer earlier this year, is a stone-cold killer of an LP. But the gap seems a long one for a band so steeped in the songwriting traditions of the early ’80s and who, indeed, recorded said disc over three days, playing live in a room together with only vocals and guitars overdubbed after the fact (“It captures the live feel of the band as closely as we could. That’s the way its meant to sound. Three guys just hammering it out!”). Truth is, before the world at large caught on to that debut EP in 2012, Night Demon had already broken up and reformed.

“Our only plan was to write and record the four best songs we possibly could, release a 7” , then call it a day,” says Leatherby of their inception. “We thought that nobody else in the world would even care. As far as we were concerned, that ship had sailed 30 years ago. Especially on the West Coast. We wrote and recorded the EP within the first five times the band ever got together. We then played one live gig and broke up. About a year and a half later, due to pressure from friends to get the band back together, we started to play some shows and released the EP digitally. It seemed like overnight we were getting emails from labels and festivals all over the world who were very interested in the band. At that point we knew this was a real thing and we just had to drop every single thing in our lives and go out and live our childhood fantasies, for real! I will say that we are already writing for the follow up record, and are making a conscious effort to record and release it in 2016.”

Playing to about 2000 people at 2014’s Keep It True, Night Demon ended up being the top seller in merchandise for the entire weekend of the festival. A perfect primer for creating a ripping debut, you might say, but the icing on the cake came during the creation of ‘Curse Of The Damned’.

“When we were writing the record, we were approached by a comic artist named James Dufresne. He had written a story called ‘Blood Sacrifice’ and wanted to use Night Demon in the story as the favourite band of the main characters. The story is really great and reads like an ’80s style horror movie. Throughout the story, the two young teens, who are obsessed with us, use our songs to summon spirits to help them fight off an axe murderer terrorising their small suburban town. We really loved the idea of it all and wanted to somehow incorporate it without going for a full on concept album. Some songs directly follow the story in the comic, while others are just inspired by it and are used as background montages, much like you would see in a film.”
We haven’t seen the comic yet, but it’s on our Xmas list.