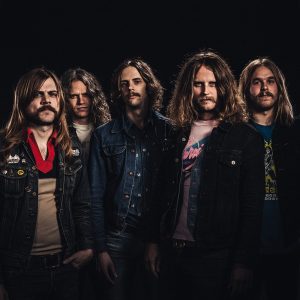 Two years ago when you promoted your third full-length ‘Time Warriors’, you made no secret that it was style-wise very close to its predecessor and your Rise Above debut, ‘Second Assault’. Yet ‘Odyssey’ doesn’t follows the same pattern does it?
“Indeed as the previous two full-lengths were kind of made in a rush. Don’t get me wrong, they’re great as they are but after ‘Time Warriors’ we knew right away that we would need more time for the next one so we could do the album we wanted to do.”

Was your first goal to surprise people?
“When we started the writing process with Tom Sutton, our guitar player [and former Church of Misery axeman], who joined last year, the first thing we agreed upon was that we needed to expand our sound. I’ve always been playing piano on the side so I suggested we incorporate some keyboards, just to see. I bought a bunch of them, mostly vintage – a Moog, a cool Crumar Bit 99, some Korg etc. I would have love to get a Mellotron but it’s way too expensive!”

So you had a strict ‘no samples’ policy then?
“Oh yeah, definitely. The Bit 99 has a digital oscillator and analogue filters but it was made in 1985 so it’s still sound primitive!”

That doesn’t really fit with the initial concept of the band then does it?
“Well, when we put the band together the plan was to play a mix of Black Sabbath and [Swedish hard-rockers and national heroes] Novembre with Scandinavian pop music. But the problem was that we also liked all sorts of music, from Bob Seger to Lynyrd Skynyrd or ’60s pop nuggets. That’s why each of our demos was set on a different style, we were just tapping the water until we settled back on the initial concept. But nevertheless, I’ve always been the ’80s guy of the lot. For the rest of the guys, this decade’s only worthy contenders are Iron Maiden and Metallica and maybe – just maybe – some Kiss and Scorpions from that period are also allowed but that’s about it as the rest is shit and it’s all about the ’70s! So when I brought to the rehearsal room the song that would eventually end up opening the album, they were quite sceptical to say the least. But I can’t blame them: we play classic hard rock yet here we were, sinking our teeth into a ten-minute plus prog song with synthesizers and a space-rock vibe, clearly inspired by Kansas.”

What came first, the music or the sci-fi concept?
“It was the title-track that set everything in motion. I first came up with the music then we started to write those weird sci-fi lyrics and when we were done with that song, we realised that this could be a great start for a concept album. And since we were already set to do something completely different, why not go all the way? And after we had ten songs done, we realised we still had a couple of extra ideas we wanted to try so that’s when we decided to turn into a epic double album. So yeah, I guess you can safely say we want bananas with it.
“It’s about this supreme race out of space that jumps from planet to planet so they can experiment creating life and populate the universe as they wish. They eventually reached Earth where the habitants refuse to let them do as they wish and the story initially is about that fight, before the human race decides to travel to the stars to discover where life originated, only to fail. As matter of fact, 80 percent of the album evolves around the concept itself but there are still three songs that aren’t connected to it about drinking, partying and so on. Rush did the same thing with ‘2112’ so we thought we get away with it too…”