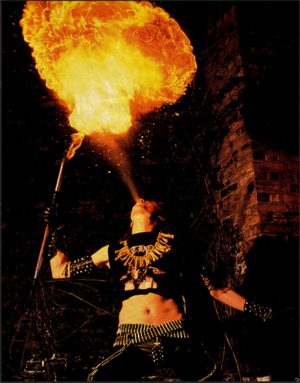 Heavy metal has a long and colourful history with fearsome feats and sideshow spectacles, the extremity often trying to match or outdo that of the music itself. The most popular of circus tricks that springs to mind when pondering the correlation between stunts and the Devil’s music is of course fire breathing. A suggested originator of this deadly looking pastime is Swedish black metal band Bathory. Pre-1988, frontman Quorthon was photographed by Tony Mottram with fire erupting several feet up into the air from his mouth. Quorthon ceased his fiery spectacles when he believed them to be gaining more attention than the music Bathory were creating, however, since then the trend has expanded; as the ’90s second wave of black metal took off, so did the fire arts. Immortal’s ‘Call Of The Wintermoon’ and Satyricon’s ‘Mother North’ videos both feature fire stunts, but these aren’t exclusive to black metal alone. For over 40 years now, Gene Simmons’ ‘The Demon’ has incorporated fire breathing into the live shows of KISS, having learned the art-form from a magician known simply as ‘Amaze-O’.

When 20th Century Fox invited Iron Fist to a day of fire eating and breathing lessons at The Fire School in East Ham, to celebrate the release of ‘American Horror Story: Freak Show‘, I all but bit their hand off. The series features all manner of creepy and unsettling circus acts, from body contortion and two headed women to a fork tongued lizard woman and, of course, fire breathing. Being invited to be a part of a promotional event for a series I’ve watched since the first season while learning the death-defying skills of some of my musical heroes was a dream come true. So, I journeyed to the center of the universe (or East London, if you want to be formal about it) with dreams of recreating that infamous cover photo we featured on the mag for issue 13, while trying to subdue the fears I had of setting myself and everyone on fire.

Our teacher for the day was Red Sarah, she was lovely and instantly alleviated any doubts I’d had. We began with body burning; this lesson begins with desecrating every rule your mother brought you up with about never ever touching fire by learning how to run lit wicks up and down your hands and arms. Despite initially flinching and squirming away from the flame, like I was about to be stuck with a red hot poker (not such a farfetched comparison, if you think about it), it quickly becomes addictive and discovering the ease with which you can rub something so dangerous all over yourself with almost no consequences is pretty great (and there’s free arm hair removal thrown into the mix – my arms are currently smooth as a baby’s bum!) Next came fire licking and eating – this part I was especially nervous of, particularly when Sarah said “I can’t actually demonstrate this part on any of you – I’m not insured to stick fire in your face” – understandable, I guess. However, this too was something that was loads of fun when you got the hang of it and you have the idea in your head that you look totally badass when, in actuality, with your head rolled back and tongue lolling out you look more like a stroke victim. I guess the looking cool and sexy is something you finesse as your skills develop.

Next up came the part we’d all been waiting for – the fire breathing. We were put in the capable hands of Preacher – he holds a number of world records for fire breathing and circus stunts, one including the most number of apples chainsawed directly from his mouth. What a guy! Before you’re allowed anywhere near the fuel or the fire, you need to learn how to ‘mist’ with water; this involves learning how to spit in a certain fashion. I have to admit, this was one of my favourite parts of the class, allowing us to be as vulgar as we liked. As we gobbed and slobbered across the floor of the warehouse, Rose’s infamous “spit like a man!” line from Titanic kept popping into my head. I usually tut at people who I see spitting in the street, but I might join in from now on, it’s great fun! Preacher was great when it came to teaching us baby dragons with actual fuel and fire – braver than most, he stood with a firm hand on our shoulder, ready to punch us with a wet towel if we went up like a Christmas pudding, as we sprayed him with a mix of saliva and barbecue fluid. There’s an odd feeling of satisfaction that you get from making enormous fireballs from your mouth and being told you’re good at it. If there’s a space for ‘arsonist’ on my CV then it’s sure as shit going on there.

If you want to see fire breathing how it’s supposed to look, and not the pitiful flames created by a group of giggling, nervous journalists, then make sure you give ‘American Horror Story: Freak Show’ a watch when it’s out on October 26. Or if you’d like to learn the fire arts courtesy of the skilled and patient instructors of The Fire School, then look them up; it’s great fun! For any bands reading this, please note I am available for hire if you’d like someone to stand at the edge of the stage and mist the crowd with spit. I’m great at that, I promise.

American Horror Story: Freak Show is out on DVD and Blu-Ray now 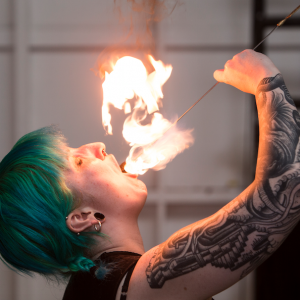 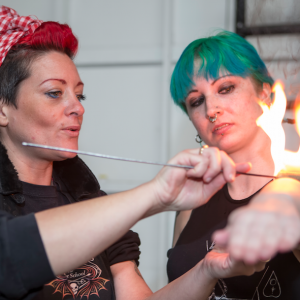 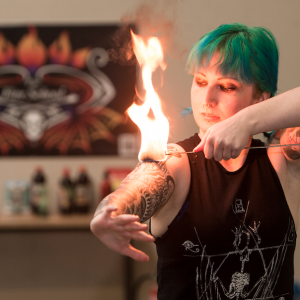 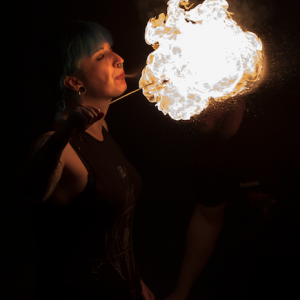