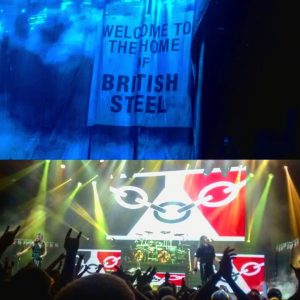 Any Judas Priest gig is special but when the defenders of the faith announce a show in their native county of the West Midlands, England, you know the air is going to be charged that wee bit more. Tonight, Wolverhampton Civic Hall gets the honour of hosting the Metal Gods, and there’s a lot to live up to with the memory of 2011’s stellar appearance in the same venue still fresh in this scribe’s mind.
However, we have to question how long the old gods can realistically rage on, but while they are still here they continue to bring new meaning to Halford’s own words: “You realise you’re getting old and no one seems to care”. The fans are out in force tonight and they are certainly not put off by the fact that Halford and co. are pushing nearly 70 years old.
Priest are sharing the road with Michael Schenker’s Temple Of Rock on this tour, and even though the group is made up of Scorpions/UFO alumni they appear at first to serve as a backdrop to chatting and beer-ordering with little interaction or even acknowledgment from the crowd. But as their set rolls on and as the sound improves, the musicians find their groove with vocalist Doogie White particularly winning over hearts and minds. It remains a little flat however until the set closes with ‘Rock You Like A Hurricane’ and ‘Rock Bottom’; these hard rock anthems eliciting some participation from the assembling crowd.
Unsurprisingly, the welcome for the headliners couldn’t be more different. The anticipation reaches fever pitch with the unfurling of a stage-disguising banner depicting a legion of dilapidated factories and a sign reading: “Welcome to the home of British Steel”. This, coupled with Black Sabbath’s ‘War Pigs’ hammering its way through the PA is enough to spark the charged air. The banner drops and ‘Dragonaut’ opens proceedings, with a sing-along chorus almost as good as any from Priest’s catalogue. Instantly the crowd swells and Priest are home. Without a moment’s hesitation we’re thrown headlong into the stomp and pomp of ‘Metal Gods’ and the stripped-back glory of ‘Desert Plains’ – Halford seeming to know his limits, adjusting his vocal performance accordingly so as not to detract from the power of these classics, instead bolstering the overall performance of the group.
Ultimate golden oldie ‘Victim Of Changes’ is next on the playlist. This song never fails to raise goose bumps, with its squealing twin guitar intro (seeing Tipton and Faulkner alone under the spotlight), pounding opening riff, and of course, that scream which Halford nails in awe-inspiring fashion. Priest then throw a slight curveball as the ‘British Steel’ cover art adorns the three huge video screens on stage. Ian Hill, linchpin of the group, rocks steady delivering the reggae groove bass intro of ‘The Rage’ and the crowd lap it up. ‘Turbo Lover’ then rocks the night, and even though the band is now stripped of the industrial quantities of hairspray they abused at the time of its release, the leather is still as tight and the studs are still as plentiful as in the song’s iconic music video. It wouldn’t be a Priest show without a ballad and in time-honoured fashion it’s time for ‘Beyond The Realms Of Death’; the belting riffs allowing the guitarists to take centre stage and, side by side, cut that iconic form as they head bang in time together.
One of the game-changer albums in the metal world came in the form of ‘Screaming For Vengeance’ and its title track makes a welcome appearance tonight before ‘Breaking The Law’ is brought out. Overplayed it might be, but they couldn’t not play it, right? Every kid who is there with their parents is waiting for that song and it’s for them; the song that was released when their parents were likely looking to a future working in a grey Midland’s factory, under a Thatcher government, lending its meaning and lyrics an extra potency.
The guttural rev of a Harley engine ushers ‘Hellbent For Leather’ into the arena and Halford, sporting a leather cap and riding crop, grimaces along to every word. Tipton is arguably looking the worse for wear tonight, due in no small part to the sprightliness of his axe-wielding counterpart, and he isn’t as physical as previous in shows but his on-point sweep soloing in ‘Painkiller’, wry smile and singling out of crowd members shows he’s still got the determination to deliver the goods. Closer ‘Living After Midnight’ gives the audience one last opportunity to scream devotion to their gods before it’s all over for another year, and scream they do.
Yes, the Halcyon days of the ’80s are long-gone but each tour sees the Priest Machine rolling on unrelenting, not even really slowing down which is more than can be said for the likes of Motorhead and even Maiden. And despite what reservations you might still have about the KK-lookalike on stage right, Ritchie Faulkner is a damn fine guitarist who honours the material but who isn’t afraid to go in all guns blazing. And fair play to the lad, he’s got big boots to fill but I’m sure you’d agree, Priest minus a founding member without the resolve to play live anymore is surely better than no Priest at all, especially when they can provide a crowd with such a fantastic heavy metal spectacle as they have done tonight. So be sure to buy a ticket and take the ride before it’s too late because you’ll sure as hell regret it when they’re gone.