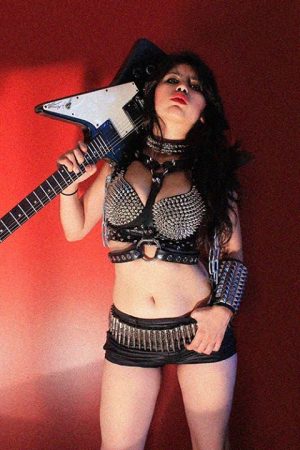 Demona may be a one-woman entity but the passion and fight Tanza Speed has is as powerful as the music she creates. Starting out at 17, Tanza started her project in Chile, where she was met with criticism from the elitist South American crowd, despite her thrash metal following in the tracks of Sarcofago and Vulcano. Seven years later, she has relocated to Canada and released her fourth EP via Hells Headbangers. Tanza explains how her two-track EP, ‘2015’ was influenced by the recent changes in her life and the challenges she had to face.
“Shortly after my comeback as a solo project again, Rockstakk Records invited me to play in Japan. This was a breath of fresh air and a sign to let me know that I shouldn’t quit under any circumstance, and even when my job denied me the permission to go, I quit and went to Osaka,” Tanza explains. “In the same year, the Metalucifer/Sabbat guys invited me to a show they were making in Chicago. I was broke at the time but it was here that I met my Hells Headbangers friends and everything changed. That was actually what ‘Allura Red’ was about, my Japan experience and ‘Chasing The Speed’ about my US experience.”
Demona’s to-the-point, furious speed metal is fuelled by the old, legendary sounds of Sodom, Destruction and Razor and despite going solo for the latest EP, Tanza had some great names on board, including Desaster drummer Tormentor, Joel Grind and Midnight’s Vanik for the recording process. As a fan of all the guys’ projects, Tanza “was excited to have such an honourable collaboration.”
As well as Demona, Tanza also creates handcrafted spandex band merchandise. Her clothing brand Speed Clothes has had full backing from all the brands that have been moulded into beautiful swimsuits, leggings and vest tops. “It’s crazy to think bands are so supportive of me, especially the level of bands like Razor, Sodom, Destruction, Nunslaughter, Desaster, Grave Digger, Asphyx etc. They really like it [the merch] and they support not just me making the product, but also share to their public what I’m doing.”
Whilst the Chilean scene may have been fuelled by “gossips, elitism, masochism and chauvinism”, the battle Demona has had to fight has got her to a place where a third full-length is on the cards and a possible trip to Europe in the beginning of the New Year. We can’t wait.