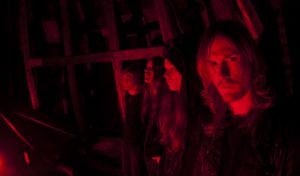 Rocka Rollas, Blazon Stone, Cloven Altar, Breitenhold… all bands under the guise of the mysterious Cederick Forsberg. So, how does this one Swedish guy manage to write and record so many (might we add, incredible, classic heavy metal sounding) albums and release them within weeks of each other? “Some people might be puzzled over this, but for me it really just comes down to a few simple things,” he laughs. “I don’t have a job!”
Ced has a deep passion for creating music and the new Rocka Rollas album, ‘Pagan Ritual’, which is one of our favourites at Iron Fist HQ, continues on a more power/speed metal pace, based on the legacy of old Helloween and Blind Guardian. “Most of the songs were actually intended for that specific sound in mind. What I can guarantee is that we will never turn into an orchestral mastodon’t like Rhapsody or post-‘Nightfall…’ Blind Guardian, but I will push the boundaries within the rules of that sound. The guitars are the main voice for us, not lutes or harps!” Ced laughs again and continues; “I’m certainly not against trying to add new layers on top, but the foundation must be guitars.”

Avoiding the “preset productions” that you can find on many modern recordings, so far Ced has released all his bands and albums through the mighty Stormspell Records and he is happy with that. “I record whatever I feel like, and they release whatever they like. It’s two very different things that work in different ways, because I just have to make sure I write the best songs I can, and do the best recordings I can, while they have to make sure they can sell as many copies as possible.”

Having been involved in music for as long as he can remember, the 26-year-old, who also plays with his dad in his band Tuckers Lilla Kapell, has few funny stories to share; “A couple of years ago, when I started recording the album ‘The Road To Destruction’ [2014] I was also thinking about recording some covers. Among all of those, I was thinking about ‘Dream Away’ by Overdrive and then just a couple of days later, Janne Stark from Overdrive mailed me about adding Rocka Rollas to his gigantic Encyclopedia Of Swedish Heavy Metal that was on the brink of getting released, and we just made it to the ‘late additions’ section, so I’m really happy for that. I told Janne about that I was thinking of a cover and so he offered himself to record a solo for it!”