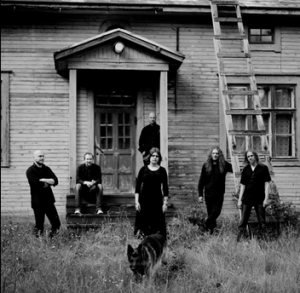 Since The Devil’s Blood arrived on the scene in 2006 there has been a steady flow of priestess-fronted occult rock bands following their path. Jess & The Ancient Ones and Seremonia, both from Finland and both with female singers, have been tarred with this association, despite sounding very different from each other. How do you feel about that? And have you had the chance to meet and play together?
Thomas Corpse, Jess & The Ancients Ones: “No, not yet. I do have a feeling that we will meet though. I don’t believe that either one wants to belong to any scene. We just want to storm our own way, and forge our own true identity. It’s not our fault that people tend to drop everything in the same box.”
Ville Pirenen, Seremonia: “The Finnish music scene is so small that everybody belongs to the same scene. Musically speaking, I’d say both bands share a love for Roky Erickson, Black Sabbath and Shocking Blue. But otherwise it’s like comparing apples and oranges. They both taste good and are part of the ‘fruit scene’, but it’s still crazy and useless to compare them.”

You both seem to be enraptured in the occult and use it as a source of inspiration. In Seremonia’s case, you even dare to add a tongue-in-cheek twist… How would you describe your approach to spirituality?
Thomas: “We walk the Left Hand Path, as led by Thomas Fiend, the band’s other main composer. Thus it is reflected in our music, as we strive to map the darkest shadows within.”
Ville: “In Seremonia’s lyrics the occult is mostly used as a metaphor. Satan represents the evil in man. Destruction of nature and the human spirit are the main themes. We take it deadly seriously.”

Was it a conscious choice to choose a female singer to front your bands?
Thomas: “Not at all, but in the end it was meant to be. Jess was the first to come along, and we just took it from there. Her deep voice was a perfect fit to our music.”
Ville: “The idea behind Seremonia was to play heavy, psych rock with Finnish lyrics. Our collective mind was set on nailing down that primitive form of riffing and singing in Finnish, but not specifically having a man or a woman to front the band. Luckily Noora Federley agreed to sing for us, since her strange, unique vocal style adds an extra eerie layer to the music. I’m not sure it’s a question of gender, but probably most guys would have ruined it by singing in an overtly ‘rock’ manner.”

Purely on a musical level, one of the biggest differences between you two is that with Seremonia clearly “less is more”, but in Jess & The Ancient Ones’ case, your music has become more and more challenging and epic. How do you view each other’s direction?
Thomas: “I have only heard two songs from Seremonia, but I can say that they definitely have their own thing going. It sounded vintage, but in a really fresh manner. Also it has that raw attitude that many bands lack.”
Ville: “I really liked the surf rock-influenced guitar work on the new Jess song; big sounding stuff. Back to your question, I guess we share some influences and record label, but overall, the differences are pretty evident. If Jess & The Ancient Ones are epic like Iron Maiden, we stumble through simple songs like Venom. Seremonia is pretty much guaranteed to stay quite primitive, it’s the way we naturally play and that’s how we like it.”

While Seremonia are very “Finnish”, you could say that Jess & The Ancients Ones have opted for a more Anglo-Saxon sound. Do you agree?
Thomas: “We have always used this approach with our lyrical art, as it feels really natural to us. No need for a change in that department. Never say never though.”
Ville: “Yes, we sing in our native tongue and we are very much influenced by Finnish hard rock, punk rock and prog rock. When we recorded the album we had no idea that anyone outside Finland would ever hear it. Now that some have, many seem to think that Finnish language sounds good in conjunction with fuzz riffing.”

Also, while Seremonia have chosen to record with minimal equipment to achieve a primitive sound, Jess have been working with Tore Stjerna [Watain, Funeral Mist and Ofermod’s producer]. What do you think of each other’s choice?
Ville: “Different music, different production.”
Thomas: “It’s just doing what feels right, and serves the songs in the best way. Tore, from the Necromorbus studio, has been a great help to us, as studios are not our favourite places to be. But we’re getting used to it.”

Have you ever played abroad so far? If so, what were your experiences like?
Thomas: “Only once, but more is to come. We had a wicked weekend in Copenhagen where we played at the ‘Heavy Days In Doomtown’ festival last May. It was a trip beyond your wildest dreams.”
Ville: “No, we haven’t yet. Roadburn will be our first.”

What are your thoughts on Roadburn and about being invited to play this year’s edition? What are the other bands you’re looking forward to see there?
Thomas: “We feel honoured, and will bring the beast on stage. I’m hoping to have a glimpse of Electric Wizard, and then disappearing in a cloud of smoke.”
Ville: “It means a lot to us that Jus Oborn invited us to play in his Electric Acid Orgy. Bands on that event alone would make a great festival. I mean, look at this list: Moss, Uncle Acid And The Deadbeats, The Pretty Things, Satan’s Satyrs. We are honoured to be in that company! Of course there are about 50 more bands that I want to see like Godflesh, Michael Rother, Psychic TV, Endless Boogie and Gravetemple. There are just too many to mention.”

What’s next for each band?
Thomas: “Our latest EP ‘Astral Sabbat’ should be out by the time you read this and we are soon going to start the fires for the next album. Some groundwork is already done.”
Ville: “We have a new 7” out for Roadburn. The next album is due in the autumn and recordings are already well on their way. We play at the next edition of Heavy Days In Doomtown, a couple of weeks after Roadburn with even more shows in Finland scheduled after that and hopefully in other parts of the universe too.”